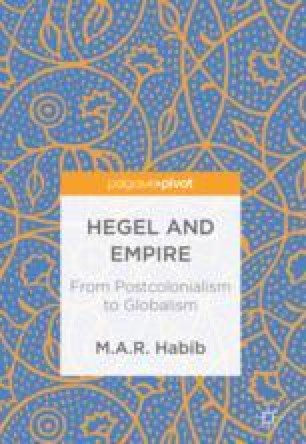 Hegel and India: The Aesthetics of Eurocentrism

This chapter discusses Hegel’s account, in his aesthetics, of India and of the Sanskrit epic, the Mahābhārata. Previous chapters have shown that Hegel is one of the creators and enablers of the discourse of modern Eurocentrism, articulating it at its highest level, not only in his politics and the philosophy of history but also in his thinking about art and literature, which is closely tied to his overall historical scheme. This chapter extends the book’s argument into the important domain of Hegel’s aesthetics, and indicates the kind of reception, use, and opposition they have evoked in postcolonial theory. In order to do this, it outlines Hegel’s vision of the evolution of art through its symbolic, classical, and Romantic forms, and then focuses on one exemplary portion of his aesthetics, namely his treatment of Indian poetry.