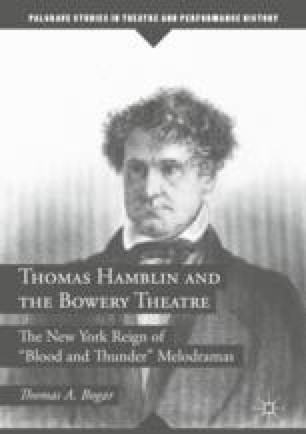 Thomas Hamblin and the Bowery Theatre pp 9-29 | Cite as

“He Is Yet Very Young, Both in Years and Practice”

Thomas Souness Hamblin, born May 18, 1800, in Pentonville, England, is hired as a teenager at London’s prestigious Drury Lane Theatre, where he meets the talented yet dissolute Edmund Kean and Robert Elliston. While touring and performing widely in the provinces, he falls in love with actress Elizabeth Blanchard, whose comedian father has reservations about the match. Hamblin overcomes those reservations and marries Elizabeth, who delivers their first child, a daughter. His ambition drives him to play Hamlet at the Drury Lane at age nineteen. He succeeds, but burns vital bridges and leaves with Elizabeth and their daughter for America, to take on greater challenges and seek greater acclaim.

Drury Lane Pentonville Dibdin London England Virginius
These keywords were added by machine and not by the authors. This process is experimental and the keywords may be updated as the learning algorithm improves.
This is a preview of subscription content, log in to check access.