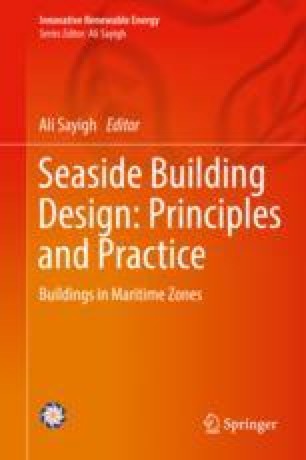 Coasts represent the meeting point between land and the sea, giving access to resources from both the sides. For this reason, a mixed economy is generally a specific characteristic of areas proximal to the seaside (Høyem, Coastal, location and site. Cambridge University Press, Cambridge, 1997). Throughout history, the Norwegian coast played a fundamental role for the socioeconomic development of the country. Vikings were nomad warriors spending large part of their life on the sea and establishing villages in those parts of the coast where climatic conditions were still favorable for farming. Until the late middle age, fishing activities were a less common practice than it is today and were often run by wealthy families, generally owning entire settlements on the northern part of the country. Climatic conditions along the coast were generally more extreme than in the inland because of the larger exposure to strong winds and rain. Part of the buildings ... along the coast were therefore inhabited during the fishing season only, when cods coming from the ocean would deposit their eggs along the coasts of Lofoten.

With the industrialization of fishing activities, economic poles throughout the coast, such as Svolvær, started to attract a larger community of people settling down for the whole year. Today circa 80%  of the Norwegian population live at a distance of maximum 10 km from the seaside (Miljøstatus, 2017). Technological development of materials made it possible to build more resistant building components, able to cope with the adverse climatic conditions of the Norwegian seaside. This gave also more freedom in localizing buildings in the landscape, in a tighter connection with nature and view. However, phenomena related to climate change are rising a high degree of uncertainty related to the climatic stress to which the built environment will be exposed in the near future. Climatic charts, developed in order to give evidence of risks due to a stronger environmental stress, represent a valid tool for the architectural design of climate-adaptive buildings (Klima2020). Besides the existence of ready-made solutions, architects are called in their projects to develop site-specific solutions, using climatic elements as a fundamental basis for their environmental performance optimization.