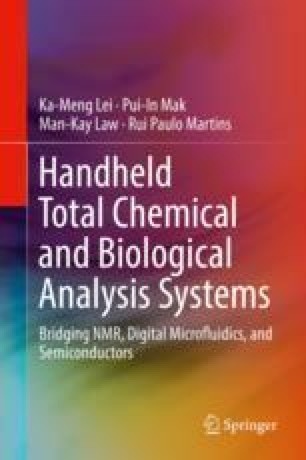 An essential part to evaluate the success of global health is the access to appropriate diagnostic tools [1]. A commendable diagnostic tool should be able to identify the disease occurred from the individuals rapidly. Especially for the infectious diseases, the turnaround time (TAT) for the diagnosis strongly affects their exacerbation level to the community. In vitro diagnostic (IVD) tool is aimed to offer a comfortable diagnosis for the patients, by taking only small specimens from the human body, e.g., blood, urine, or sputum, for analysis. Consequently, technologies enabling effective in vitro diagnosis become highly attractive for both developed and developing countries [2]. Tremendous efforts have been geared toward developing clinical-level IVD tools. Despite achieving high accuracy, the resulting TAT can be too long for diagnoses of contagious diseases like Ebola and SARS in the rural area, and the requisite of skillful operators and sophisticated equipment to perform the assays can dramatically raise the cost of the assay.

An essential part to evaluate the success of global health is the access to appropriate diagnostic tools [1]. A commendable diagnostic tool should be able to identify the disease occurred from the individuals rapidly. Especially for the infectious diseases, the turnaround time (TAT) for the diagnosis strongly affects their exacerbation level to the community. In vitro diagnostic (IVD) tool is aimed to offer a comfortable diagnosis for the patients, by taking only small specimens from the human body, e.g., blood, urine, or sputum, for analysis. Consequently, technologies enabling effective in vitro diagnosis become highly attractive for both developed and developing countries [2]. Tremendous efforts have been geared toward developing clinical-level IVD tools. Despite achieving high accuracy, the resulting TAT can be too long for diagnoses of contagious diseases like Ebola and SARS in the rural area, and the requisite of skillful operators and sophisticated equipment to perform the assays can dramatically raise the cost of the assay.

Recently, decentralized diagnostic solutions, namely, point-of-care (PoC) devices, have gained notable interests attributed to their fastness, small footprint, and tiny sample usage. Wide varieties of diagnostic platforms have been invented, such as the lateral flow assays [3, 4, 5, 6] and pathbreaking lab-on-a-disc immunoassay [7, 8, 9, 10] for PoC applications. Beyond them, PoC devices on complementary metal–oxide–semiconductor (CMOS) chips are particularly promising, as they can enjoy the maturity of microelectronics in manufacturing and its outstanding performances in both physical sensing and signal processing. While the mainstream lateral flow assay is confounded to provide merely qualitative or semiquantitative results [11], the CMOS biosensors can attain a quantitative result and are beneficial to rapid and low-cost assays. Especially for low-cost IVD applications, CMOS chips in a centimeter scale can significantly miniaturize the diagnostic tools.

Decentralized healthcare systems are highly attractive for developing countries, as they typically suffer from lack of access to high-quality centralized diagnostic tools in the resource-limited area. Delay of diagnosis and treatment aggravates the healthcare condition of their countries, then affecting the global health system. According to the World Development Report in 2004, the lack of access results in failure of the health services [12]. Without proper equipment for diagnosis, the clinicians could only diagnose diseases from the clinical symptoms in resource-limited regions. Yet, this may cause difficulties in the diagnosis of the patients when the symptoms are still unobvious. Especially for infectious diseases, the delay of treatment can worsen the situation of individuals and consequently the communities. According to the report of the World Health Organization (WHO), the leading infectious diseases (lower respiratory infections, HIV/AIDS, diarrheal diseases, malaria, and tuberculosis) account for roughly one-third of all deaths in low-income countries [13]. Also, the strong growths of the population in those areas give rise to the demand of affordable IVD tools. By the end of 2050, the less developed countries are expected to have a population of 8.4 billion, as depicted in Fig. 1.1, where Africa and Asia contribute roughly 2.48 and 5.27 billion, respectively [14]. Thus, there is a rapidly growing market of low-cost PoC devices for developing countries.
The aging problem of the developed countries also creates an enormous challenge. A healthcare solution that can deal with the continuous increment of life longevity is of demand. As revealed in Fig. 1.2, the old age dependency ratio, which gives insight to the population of elderly (65+ years) as a share of those in working age (age 15–64 years), will be rising in the coming decades. The old age dependency ratio of more developed countries will reach 0.4 in 2034 and eventually 0.46 by the end of 2050 (i.e., increase by 72% from 2015). Thus, the burdens on the clinical resources in those areas will become tighter, especially for the patients in proximity to death [15]. An efficacious healthcare solution will benefit this situation and drive the growth of the market for IVD tools. To this end, the market for IVD tools should not be merely aimed at less developing countries but also toward efficient and convenient diagnosis in developed countries. In fact, according to the report from Forbes/Investing, the IVD market, valued at ~$50 billion in 2012, will expand to $70 billion by 2017 [16].

Nuclear magnetic resonance (NMR) is powerful to explore the sample information at the molecular level. The underpinning physics of NMR is the exchange of energy between the RF magnetic field and the spin of the non-zero spin nuclei (i.e., 1H, 13C, 17O, 31P, etc.) [17, 18]. Under the magnetization with an external magnetic field B0, parts of the nuclei align with this external magnetic field and have a spin-up state, while the others have a spin-down state and align in opposite direction (Fig. 1.3a). As the population ratio between the nuclei with spin-up and spin-down state is proportional to B0 and this difference determines the amplitude of the NMR signal, there exists a tradeoff between the portability and sensitivity of the system as discussed later. With an RF magnetic field B1 orthogonal to B0 applied to the nuclei, they precess and tip away from the direction of bulk magnetization (Fig. 1.3b). The nuclei only accept RF excitation at Larmor frequency, defined as:
$$ {f}_L=\gamma {B}_0 $$
(1.1)
with the gyromagnetic ratio of the nuclei γ. For a 0.46-T magnet, the f L of 1H is ~20 MHz. The nuclei do not precess if there is a mismatch on the excitation frequency and fL. After tipping the nuclei with 90° from the direction of bulk magnetization, the excitation is turned off. Then, the recovery of the magnetization in parallel with B0 is defined as the spin-lattice relaxation time T1 whereas the recovery of the magnetization perpendicular with B0 is defined as the spin-spin relaxation time T2. This T2 reveals the magnetic field decoherence information across the nuclei. Unfortunately, the unavoidable inhomogeneity of B0 from portable magnet causes spatial variation on the precession rate of the nuclei thus the T2 decays at a much faster rate T2*. This blemish hinders the measurement on original T2. To surmount this, the spin-echo technique such as Carr–Purcell–Meiboom–Gill (CPMG) pulse sequence can be utilized to refocus this dephasing effect on the nuclei by flipping the nuclei 180° with interval τ; thus the spins are maximized again from B0 inhomogeneity [19, 20]. The envelope of the echoes responses allows the derivation of the resulting T2 with the following mathematical expression:
$$ A\left[n\right]={A}_0{e}^{-\frac{n\tau}{T_2}} $$
(1.2)
with the echoes amplitude for nth echoes A[n] and the initial amplitude A0. More importantly, the strength of B0 correlates to the signal-to-noise ratio (SNR) of the NMR signal and is described as [21]:
$$ {\mathrm{SNR}}_{\mathrm{NMR}}\propto {\mathrm{KB}}_1\sqrt{\frac{1}{Fl\xi \varDelta f}}\frac{{\left(\frac{f_L}{2\pi}\right)}^{\frac{7}{4}}}{\sqrt[4]{\rho }} $$
(1.3)
with homogeneity factor K, magnetic field strength per unit current produced by the RF-coil orthogonal to the permanent magnetic field B1, the noise figure of the receiver’s forefront amplifier F, length of the RF-coil conductor l, the bandwidth of the system Δf, and the resistivity ρ of the RF coil. From (1.1) and (1.3), the SNR of the system is proportional to the power of 7/4 of B0, thus demanding a stronger B0 to enhance the SNR. Although there seem to be numerous ways to enhance B0 and its homogeneity (i.e., for higher resolution and stronger signal), the portability and power consumption of the system will be penalized due to the need for a heavier and bulkier magnet, not to mention a higher operating frequency that will be required for the electronics.
By exploiting functionalized magnetic nanoparticles (MNPs) as the probe, the NMR-based quasi label-free detection scheme can pinpoint a broad range of unprocessed biological targets such as DNA [22], protein [23], and virus [24] for in vitro diagnosis. These superparamagnetic MNPs have significant impacts on T2 of the samples according to their magnetization (Ms) attributed to their capability to perturb the local magnetic field homogeneity. When the target is absent in the sample, the MNPs stay monodisperse inside the solution (Fig. 1.4a). Consequently, when the targets exist inside the samples, they will cross-link with the probe-functionalized MNPs, assembling nanoparticles micro-clusters (Fig. 1.4b). These micro-clusters, with a diameter dc depending on the concentration of the target biomolecules, have a different magnetization MC [25]:
$$ {M}_C={M}_S{\left(\frac{d_c}{d_s}\right)}^{f-3} $$
(1.4)
with the fractal dimension of the micro-cluster f and the diameter of a single MNP d s . Accordingly, T2 of the sample is commensurate with MC. In this respect, T2 is linked with the amount of target upon nanoparticle agglomeration and attainable for quantification. Unlike other sensing schemes, screening by NMR is rapid and low cost as it is quasi label-free for the samples and immobilization-free for the transducers/electrodes. Such benefits render NMR-based detection as a promising solution for PoC applications. Although NMR is known for its relatively low sensitivity, the MNP here provides inherent signal amplification to NMR since a single MNP micro-cluster can affect billions of adjacent water molecules [26].

Conventionally NMR equipment are bulky and have limited applicability for PoC diagnosis. Recently, researchers have been focusing on miniaturizing the magnet for NMR and migrating the modular and complex electronics into CMOS chips [27, 28, 29]. With advanced circuit techniques to lessen the penalty of signal attenuation induced by the compact magnet (<7.3 kg) as stated in (1.3), these micro-NMR systems offer a trailblazing sensing method befitting more the PoC diagnosis.

The book is organized as below:

Chapter  3 illustrates the design and implementation of the palm-size micro-NMR relaxometer with the electronic-automated digital microfluidic device for sample management. Confounded by the limited inner space of the portable magnet, management of the sample under assay remains a critical issue for micro-NMR. Herein the integration of micro-NMR with the digital microfluidic device is evinced to facilitate the sample management and attain a comparable assay result to the conventional approach [31, 32, 33, 34, 35].

Chapter  4 discloses the design of the micro-NMR relaxometer with B0-field stabilization module [36, 37]. Ascribed to the temperature instability of the magnet, calibration on either excitation frequency or Larmor frequency of the protons is necessary to safeguard the operation of the micro-NMR relaxometer. Herein, a vertical Hall sensor and relevant readout circuit are integrated with the micro-NMR transceiver to sense the B0-field variation of the magnet for calibrating the B0 field of the portable magnet by injecting a current to its auxiliary coil. The closed-loop B0-field stabilization here can suppress the variation of the B0 field and ease the operation.