The Logical Legacy of Nikolai Vasiliev and Modern Logic 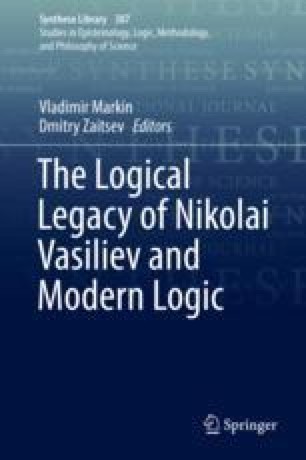 N.A. Vasiliev in the Context of Philosophical and Methodological Disputes of the Early Twentieth Century

One of the key objectives of this article is, on the one hand, to present the general context of the philosophical and methodological disputes of the early twentieth century, both in the Western countries and in Russia, using examples of disputes in the framework of the ‘psychologism-antipsychologism’ antithesis. At the same time, the discussion between psychologism and antipsychologism is considered as a manifestation of the idea of unity – despite the differences and certain forms of individualisation – between the spiritual cultures of Russia and the West. This consideration is instrumental in showing that N.A. Vasiliev was included into the general context of the philosophical and methodological disputes of his era; and that in this context he takes a metaposition through rejecting the views of the advocates of both poles of the antithesis. The article describes his position as that of anti-antipsychologism. The double “anti-anti” negation is not equal to the statement of the initial position, in this case, psychologism. The relevance of this study lies in the fact that the beginning of the twenty-first century has seen a rise in the interest in the problems of psychologism in logic, philosophy, and culture in general.