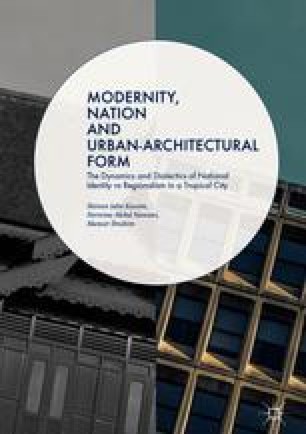 Urban-architectural form, and its language and vocabulary, has a powerful effect in infusing one’s memory with certain shapes and markers that consequently form one’s sense of place. Regional and national identity, are two perrenial drivers of urban and building form the former associated with the rise of the nation-state as a territorial community particularly in the post war era - while the latter, is related to the notion of the 'region', which generally covers a larger, more encompassing, more multi-ethnic and fluid entity and definition. Malaysia, Singapore and Indonesia for example, are neighbouring countries or nations, within lie within the SouthEast Asia region which is a regional block or considered as a 'region' which contain and reflect common identities conventionally within a larger geographical territory. Malaysia, for example, represents a sovereign nation within this region, while the Asia-Nusantara region has a specific identity with historically longer and deeper past, including past references have defined 'regional' identities such as the Malay-Nusantara region, amongst others, for example, what Andaya (2008) has termed as the 'sea of Malayu'. Malaysia, is a more recently formed nation, i.e. in 1963, Sabah and Sarawak had merged into the Federation and from then on, Malaysia became a nation with a specific territtory and community; Peninsular Malaysia, Sabah and Sarawak, and uniquely positioned at the crossroads between the East and West. It has, for centuries, represented  a region where global economic and cultural forces seem to crisis cross one another. Particularly regions around the Straits of Melaka, as observed by Andaya (2010, p: 9): "The Straits of Melaka served as a channel of goods, ideas, and news from the outside world, thus igniting the imaginations of individuals and groups living along its shores to new possibilities of ethnic and other affiliations." and furthermore and more significantly, “…All maritime routes linking the major civilisation to the east and west of Southeast Asia led through the Straits of Melaka… International trader moving between east and wes found ideal conditions…” (Andaya, 2010: p237). It is also in this very region where local forms are ‘modernised’ by contact with the West, while modern forms of Western origin are acculturised and acclimatised by local customs and contextual conditions. Chang (2016) summarised the conditions of these newly independent nations in SouthEast Asia as follows.

Being part of the tumultuous transition from colony to nation, meant that these pioneering architects had first-hand experience of the inequalities of post-colonial rule and strove to be free from it. However, they also realized that colonial dominance did not stop with the formal end of colonial rule and the beginning of independence. As postcolonial scholars pointed out, many colonial power relations lingered on after the end of formal colonization, … thus, attaining genuine independence meant not just becoming a sovereign political entity and embarking on modernization and development, It also meant demonstrating social and cultural independence.