Gender and Mobility in Africa 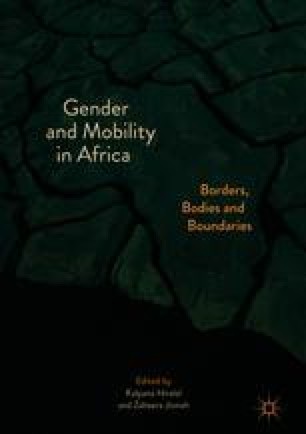 In the last two decades, “the Zimbabwean Crisis”, an intersection of domestic national political and economic instability, has initiated extensive migration of Zimbabweans to different destinations including its neighbour South Africa as well as elsewhere in the region and beyond. In addition to increasing numbers of people migrating there is more diversification in terms of who migrates as well as shifts to more extended stay. Included in this current wave of migrants to South Africa cities are an increasing number of women who unlike the historically more visible Zimbabwean female cross-border trader are often locating in this host space for indefinite periods. Drawing from research carried out with a sample of young Zimbabwean women located in the periphery of the city of Cape Town, this chapter considers the ways in which migrant women are constructed and positioned within the new social environment they are located, pointing to the assumptions, gendered expectations and stereotypes which govern this current wave of Zimbabwean women’s migration experiences. The chapter considers the dense networks of everyday life in the ‘community’ of Zimbabweans, which are fostered by proximity, shared backgrounds, and multifaceted, multi-purpose migration networks, looking in particular at the complicated relationship between reproduction of ‘community’ and the construction of gendered migrant identities. I point to the assumptions, gendered expectations and stereotypes which govern this current wave of Zimbabwean women’s experiences as they negotiate households, neighbourhoods, and community in the ‘working class’ townships on the Cape Flats. I discuss the ways in which ‘community’ and within it, social gendered norms are produced and reproduced, exploring in particular how young women position themselves within these socio-cultural structures and the implications for their day-to-day interactions and overall migration experience.

Mobile Women Zimbabwean Women Zimbabwean Migrants Migration Context Township Spaces
These keywords were added by machine and not by the authors. This process is experimental and the keywords may be updated as the learning algorithm improves.
This is a preview of subscription content, log in to check access.