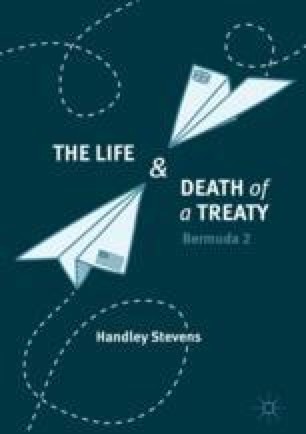 Access to Heathrow was first restricted, for charter services only, by Shovelton’s letter of 17 March 1978 to Atwood (Part III, Document 6). Introduction of the 1978 London Area Traffic Distribution Rules (Chap.   3 ) led to a further letter from Roberts to Hight dated 4 December 1980, which added a restriction on all ‘airlines not currently operating at Heathrow’ (Part III, Document 14). The 1980 text of Annex 1 Section 7 (column 1 below), which translated Robert s’ letter into the more formal language of the treaty, was attached as Enclosure 4 to the Exchange of Notes dated 4 December 1980 (HMSO, London, Cmnd. 8222, May 1981), but was considered to have entered into force on 1 April 1980. The restriction of Heathrow Access to Pan Am and TWA in the 1980 text was the cause of the Heathrow Succession negotiations (Chap.   4 ) which generated the 1991 text (column 2 below).

London Airport Heathrow Shovelton Charter Services Distribution Rule
These keywords were added by machine and not by the authors. This process is experimental and the keywords may be updated as the learning algorithm improves.
This is a preview of subscription content, log in to check access.