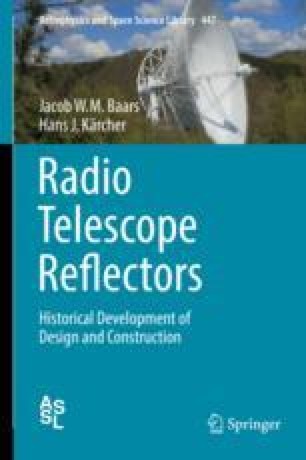 According to legend, the paraboloidal reflector was first used by Archimedes to burn Roman ships attacking Syracuse. In 1636, Mersenne (1588–1648) suggested using a paraboloidal reflector as an astronomical telescope. Much later, in 1888 Hertz (1857–1894) selected a cylindrical paraboloid to demonstrate the existence of electromagnetic waves at radio wavelengths. In the twentieth century, the paraboloidal reflector played a dominant role in the birth and development of radio astronomy, radar, deep-space probe tracking and satellite and terrestrial communication. The improvements in size and accuracy of the reflector surface and in precision and stability of pointing direction have been inspired mainly by radio astronomy since the late 1930s. This has resulted in great advances in the design and fabrication of structures and control systems to cope with the unavoidable influences of gravity, wind and temperature variations on the performance of the telescope.