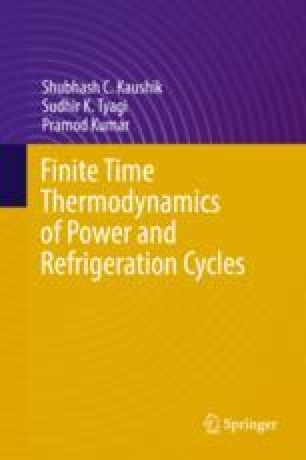 We know that heat engine is a power-producing device which absorbs heat from a high-temperature reservoir (heat source) and converts some of its part into mechanical (shaft) work and rejects the rest to a low-temperature reservoir (heat sink). All power-producing devices (heat engines) operate on cycles utilizing either gas or vapour, as the working fluid, and are known by their name. For example, if a heat engine utilizes gas as the working fluid, it is known as the gas power cycle such as Carnot, Brayton, Stirling, Ericsson, Braysson, etc. Similarly, if a heat engine utilizes vapour as the working fluid, it is known as the vapour power cycle such as Rankine cycle. The study and analysis of power cycles are very exciting and are an important part of the engineering thermodynamics, because they involve many complicated aspects and, hence, are very difficult to analyse completely. Some of these complicated aspects are pressure drop, friction, heat loss, entropy generations due to various causes, and the lack of sufficient time for the establishment of equilibrium condition, during each cycle, leading to more difficult, complex, and incomplete analysis of power cycles. To overcome these difficulties associated with power cycles, some idealistic assumptions are made. When a cycle is free from all irreversibilities and complexities, it is called an ideal cycle, and the processes followed by such cycle are reversible processes and vice versa. Most of the power cycles are designed for the purpose of converting thermal energy into shaft (mechanical) work. The performance of a heat engine is expressed in terms of thermal efficiency, which is basically the ratio of network produced by the heat engine to that of total heat supplied and denoted by ηth, as below:

Carnot Heat Engine Finite Time Thermodynamics Rankine Cycle Working Fluid Infinite Heat Capacity
These keywords were added by machine and not by the authors. This process is experimental and the keywords may be updated as the learning algorithm improves.
This is a preview of subscription content, log in to check access.