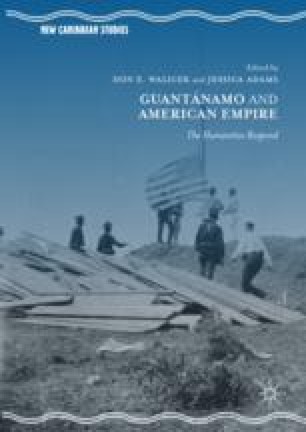 This chapter features four poems by José Ramón Sánchez Leyva, a poet from Guantánamo City who has spent several years writing about the presence of the U.S. military in the region. The poems explore the writing process and different aspects of life near the naval base at Guantánamo Bay, probing the dynamics of questioning and socioeconomic marginalization that mark the lives of many guantanameros. Original English translations are provided for the first three poems, which are presented alongside their Spanish-language source texts. The fourth poem, published in its original form, is written using an official form that the U.S. Department of Defense developed for use by the Joint Task Force. The military form, which documents classified information, has been used in relation to the ongoing imprisonment of men in detention camps where they have been held and tortured since 9/11. Sánchez Leyva uses it to profile the life and poetry of one of Guantánamo Province’s most significant writers, Regino E. Boti (1878–1958).