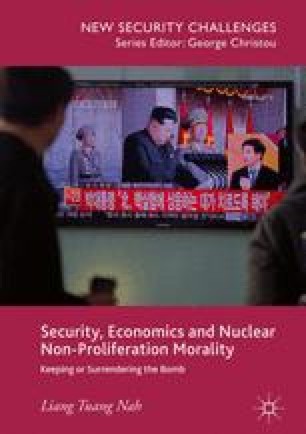 This chapter examines the final principal case, the Democratic People’s Republic of Korea (DPRK). As with Chaps. 3 and 4, the realist, economic liberalist and social constructivist reasons paving the road to atomic arms development, from the Korean War to the twenty-first century, will be discussed. Thereafter, North Korea’s role as a split-outcome disarmament/rearmament case will surface as the realist, liberalist economic interdependence and social constructivist factors behind the steps towards nuclear disarmament during the 2007–2008 period will be explored. After deconstructing the nuclear armaments policy decisions made by Pyongyang, explanatory models supporting both arms building and nascent arms decommissioning, using the trilateral theoretical framework, will be derived.

North Korean Pyongyang Democratic People’s Republic Of Korea (DPRK) Nuclear Disarmament Strategic Arms Reduction Treaty (START)
These keywords were added by machine and not by the authors. This process is experimental and the keywords may be updated as the learning algorithm improves.
This is a preview of subscription content, log in to check access.