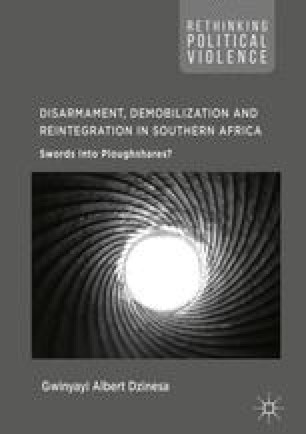 Disarmament, Demobilization and Reintegration in Southern Africa pp 1-13 | Cite as

In the Introduction, the book highlights the rationale behind the crafting and implementation of the disarmament, demobilization and reintegration (DDR) of former freedom fighters in Zimbabwe, Namibia and South Africa in the context of post-colonial transitions. It notes that although the three DDR cases have been studied individually, no study has attempted their comprehensive comparison using a common analytic framework. The Introduction notes that a sustained lead state role is important for reintegration, which is a long-term process, needing patience, experimentation and determination. All the three countries are still grappling with problems of inadequate reintegration decades after the end of their liberation struggles. South Africa, the last of the three states to implement DDR, celebrated its own twentieth transition anniversary in 2014. The time is ripe for a credible and definitive comparative assessment of how the structural and organizational framework, target group, state’s lead in DDR, linkages between DDR and Security Sector Reform in nation- and state-building and post-conflict violence type shaped DDR.