Media, Diaspora and the Somali Conflict 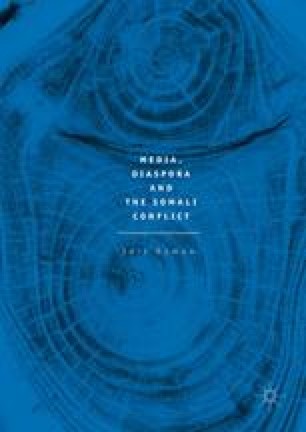 At its core, journalism serves to provide information to the public for them to make informed choices about their lives. Journalism can also be a vehicle for transparency, good governance and ethical standards and playing this role can often be a key motivation for journalists (Cottle et al. 2016). But, what if journalism is operating in ecology embedded in conflict? This chapter sheds some light on how the decline in the professional standards of Somali’s media institutions, due to state collapse, has affected the industry and the journalists. Using interviews conducted with Somali journalists and producers, the chapter offers an analysis of the general milieu within which diaspora journalists work and the motivations behind how they cover the conflict that re-creates it. Somali diaspora journalists maintain close personal and professional relationships with Somalis in Somalia and by extension the Somali conflict. This relationship can therefore have a complex and multi-dimensional nature. Somali diaspora media has grown to fill the informational void that the conflict has produced. However, it largely remains a collection of media outlets run by ordinary people transformed into ‘amateur newsies’, instant reporters and opinion columnists (Allan in Citizen Journalism; Global perspectives, Peter Lang Publishing, New York, 2009: 24). Many of them lack formal education and professional skills and training as well as ethical values and responsibility, which exacerbate the potential to re-create the conflict.