Curricula for Sustainability in Higher Education 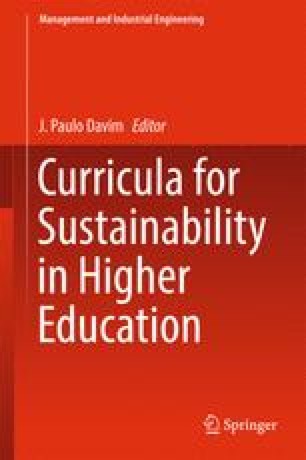 Curricula for Sustainability in Higher Education pp 77-127 | Cite as

Thinking About Sustainability: Issues and Themes for College Students

This contribution discusses many of the themes that the author has used in various Environmental Studies courses at the University of Oregon. While this collection of themes could be viewed as eclectic, they are well rooted in what is happening in the real world. In cases of data, as this article was written December 2016, we have tried to find and use the most current data to describe some situation. This is quite important because in the arenas of energy generation, resource consumption and climate change, the real world strongly evolves and can change dramatically from what the situation looked like just a few years ago.

Social Justice Environmental Justice Battery Pack Blue Water Lead Acid Batterie
These keywords were added by machine and not by the authors. This process is experimental and the keywords may be updated as the learning algorithm improves.
This is a preview of subscription content, log in to check access.

The concept behind zero waste is a good example of taking a whole system approach to consumption and in that process minimizing the amount or waste that is produced. Zero waste includes far more than just recycling. At its core, the zero waste movement emphasis reduced consumption through consumer choice of products that can be re-used. In turn, this movement can put pressure on the commercial sector to supply more re-usable goods to the consumer. Indeed, the power of the consumer could be large in this regard if conscientious consumers begin to refuse to buy products that cannot be reused.

A very good example of the kind of quantitative sustainability which can be achieved on a local scale through the zero waste concepts is the very successful Zero Waste program at the University of Oregon, which has now received national prominence. The mechanism of a solid waste audit becomes the principle manner which programs like this can actually, quantitatively, prove sustainability on the scale of their campus waste. Further mechanisms of waste to composting instead of landfills go a long way in helping to ensure zero waste.

Since the implementation of this program depends almost exclusively on student labor (sometimes volunteer) the program becomes a visible manifestation of what sustainability can look like. Programs like this are real, they are quantitative, and they make an impact in the real world. All campuses are strongly encouraged to consider following the lead that University of Oregon has established.

Below we give some example student assignments based on some of the material presented in this chapter.

It is possible that the require links to databases in some of these assignments will not appear in the paper text—therefore, please go to http://homework.uoregon.edu/pub/class/springer.html  to fully access these assignment suggestions.

Q1: Of the 7 stated reasons for resistance to change, write an editorial style 600-word piece on which 2 of these 7 reasons are the biggest obstacles to overcome and identify what strategy you would employ to overcome them.

Q2: Research the University of Oregon Zero Waste program and write a 600-word letter to the editor of your student newspaper advocating the benefits to your campus if it were to adopt this kind of program.

Q3: This data exercise makes use of This Database. (Links to an external site.)

An editorial in your student newspaper claims that US foreign policy has been oriented towards protecting US interests in the Middle East for the last 30 years because “almost all of our imported oil comes from the Middle East—everyone knows this”.

Using the database above:

Group A: Canada, Mexico and Venezuela

Q4: William Cronon’s, The Trouble With Wilderness (Links to an external site.), (1996) is one of the most insightful works of environmental philosophy ever produced.

One of the fundamental tenets of environmentalism is the holiness of wilderness. It is considered a pure, pristine environment, “an island in the polluted sea of urban-industrial modernity,” a landscape untouched by humanity. This concept is very much a human construct, however, and it is merely the latest version of an evolving human relationship to the wild.

The above is an excerpt from a review of Cronon’s essay (linked above).

For this assignment, you are to read this essay and write a 600–800-word synopsis that included the following:

Q5: Tesla’s Powerwall Solution (Links to an external site.)—let’s do the energy math.

Here are the raw data/technical specifications for this new product needed to solve all parts of this question. The process is far more important than any numerical answers.
Show all work involved in making the following estimates:

Q6: Research and read about the Tesla GigaFactory and its planned production of 500,000 vehicles annually. Your team is hired as the consulting team for the GigaFactory. There are numerous studies on the lithium supply chain/problem, etc. that you can easily find via a Google Search. You are to access a variety of reports and synthesize a 500-word consulting report to Tesla on the probability that they can actually meet this production goal with existing resources. If they cannot meet this goal, what needs to be then done to find new resources.

Q7: In this simulation, we explore the relationship between percentage of an ecosystem that is made toxic by some industrial process and the ability for a migrating species in that ecosystem to survive. The image is a snapshot of the simulation which shows an ecosystem in which 10% of it is made toxic—this is represented by the oil derrick symbols and the other 10%, the spider symbols, represent a migratory species that uses the resources available on any of the green squares. The simulation was actually built to described the situation in Eastern Ecuador due to the highly exploitative oil exploration that occurred there in the 1980s and 1990s.

The goal here is to understand critical phenomena as there is a threshold of toxic ecosystem filling factor as a function of species migratory habits and timescales. In the control panel the user sets the initial population size, the total habit area and the breeding delay. The breeding delay is the number of pixels (green squares) of movement required for offspring. If one of the spiders moves randomly into one of the oil derrick squares, then it dies.

The links to the relevant simulations are here:

The goal of the student exercise is to determine the parameters for a population to be stable after 20 generations or so (there is a generation counter) and to explore the stability requirements in terms of initial population and breeding delay for each of the filling factor scenarios. After running a few of these the student should understand that once the filling factor gets too high, there is no way to produce a stable population.

Q8: Below are 5 quotes related to Consumerism on the part of some 20th century thinkers. I include them initially as anonymous so that you want be pre-biased. These quotes somewhat reinforce my closing remarks regarding our facile sacrificing of the sacred for the sake of the expedient and convenient (e.g. the 1950s throwaway society—see Dunning 1992).