The Royal Society and the Discovery of the Two Sicilies 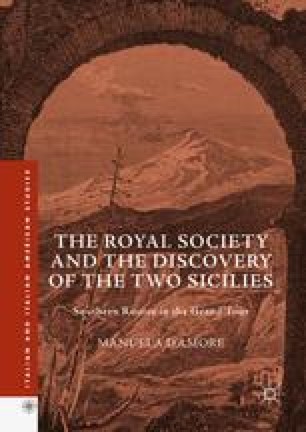 Southern Paths for Learned Travellers: The Discovery of Herculaneum and of the Neoclassical Mediterranean

This is the core chapter of the book. It historically refers to the period 1739–1780, and it sheds light both on the politico-cultural process leading to the discovery of the buried Roman city of Herculaneum (1738) and on the Fellows’ growing attraction to the Bourbon Kingdom of Naples. Textually based on the letters that the Fellows accepted to publish, and informing the reader about the Transactions’ exceptional contributors—in this period, Camillo Paderni (ca. 1715–1781) in particular—Chap.  4 is complete with a histogram and a table showing that in the decades 1739–1760 cultural communication was related to the huge archaeological area, which resulted in a growing number of English visitors in the region of Campania, and in the beginning of a new evolutionary phase in the Grand Tour of Italy.

It is divided into five columns: the one entitled “Location or Academic Source” shows the historico-geographical spaces the articles referred to, or the learned institutions that the journal’s Editorial Board obtained information from; “Scientific Field” lists the various branches of learning that the Royal Society’s correspondents covered in their writings.

The great majority of articles relate to cities, regions or natural sites in eighteenth-century Italy; the only exceptions are those written by the antiquary John Swinton, F.R.S. and a member of the Academy of the Apatisti, on ancient “Etruria” and “Punic Sicily”.

Cite this chapter as:
D’Amore M. (2017) Southern Paths for Learned Travellers: The Discovery of Herculaneum and of the Neoclassical Mediterranean. In: The Royal Society and the Discovery of the Two Sicilies. Italian and Italian American Studies. Palgrave Macmillan, Cham. https://doi.org/10.1007/978-3-319-55291-0_5