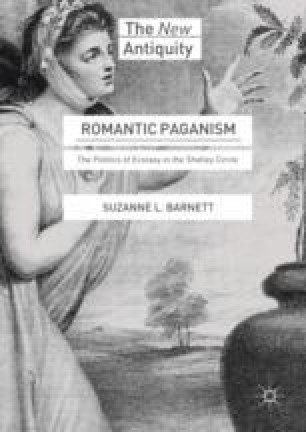 “Prattling about Greece and Rome”: Paganism, Presumption, and Gender

Chapter
Part of the The New Antiquity book series (NANT)

Barnett explores how the pagan adoptions of Mary Robinson, Mary Tighe, Mary Shelley, Emma Hamilton, John Keats, and Leigh Hunt were read by contemporary critics as both presumptuous and either troublingly sensual or suspiciously effeminate. By adopting classical tales by Ovid and Sappho, women writers could circumvent the taboo against women writing about sexuality and avoid (or forestall) critical censure. Keats’ and Hunt’s “pretty paganisms” and sensual excesses were regarded suspiciously by a hostile press that compared these “Cockney poetasters” to “Hottentot[s] in top-boots” for aping a cultural heritage supposedly above their stations. For both the “cockney poets” and women writers, paganism was an energy seemingly capable of revolutionizing society when all other methods (like economic and political) seemed inaccessible to them.

Women never stood lower in the world, than under the two pretended dispensations or revelations of religious duties, that, called Christian, and that, called Mahometan, which give to woman no other rank among animated beings, than that of being the instruments of breeding sons for immortality. The Pagans, as we whom you call freethinking philosophers, ranked women with their deities, as emblems of just human equality on earth.

But is there not something effeminate, Cockneyish, and Sporus-like, in a male writer speaking so of male lips? If Leigh Hunt be indeed an unfortunate woman, disguised in yellow breeches, this slaver about lips may be excusable; but if he really be of the sex assumed, nothing can be more loathsome.