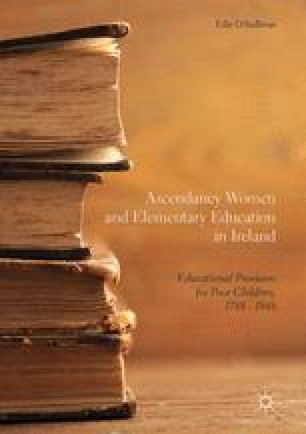 This chapter outlines the life and contribution to education of Susanna, Marchioness of Waterford (1784–1827). Born in England, Susanna Carpenter was a member of the Anglican community. A substantial dowry was provided by her grandfather prior to her marriage in 1805 with Henry le Poer Beresford, 2nd Marquess of Waterford. Three years later Susanna became her wealthy grandfather’s sole heir. The couple and their children lived on Curraghmore Estate, Portlaw, Co. Waterford. Here Susanna built and maintained an elementary school for girls, Catholic and Protestant. She was the school’s only patron. Susanna died in 1827, just one year after her husband. Her involvement with educational provision was continued by her daughter-in-law, Louisa Stuart. Susanna’s school still stands.