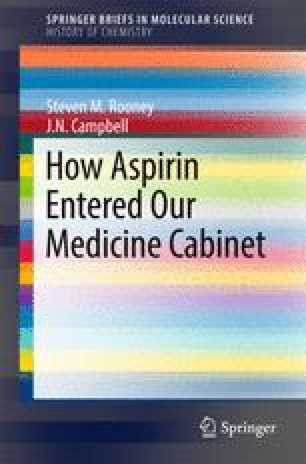 How Aspirin Entered Our Medicine Cabinet pp 33-45 | Cite as

By the end of 1918, as the world reeled at the prospect of more death not at the end of a gun, but rather at the hands of the non-discriminating flu epidemic, Bayer’s former hold on the aspirin market was in a free-fall. Now firmly in the clutches of the Alien Property Custodian (APC), the German-based firm faced the prospect of being carved up piecemeal. The international division in the United States was up for public auction, and back home foreign investors were seeking to claim mysteriously open shares that were available through the inner workings of the Versailles Peace Treaty . For the time being, Carl Duisberg’s dream of a hegemonic empire of Bayer crosses was at an end.

Patent Medicine Advertising Budget Brand Identity Monocalcium Phosphate Medicine Cabinet
These keywords were added by machine and not by the authors. This process is experimental and the keywords may be updated as the learning algorithm improves.
This is a preview of subscription content, log in to check access.