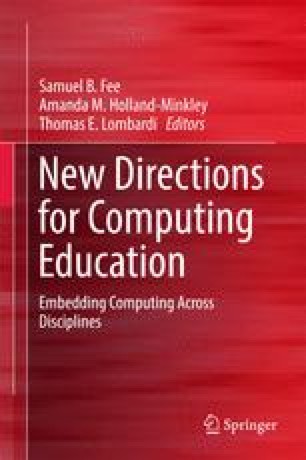 The Development of a B.A. in Computer Science and Computational Thinking

In 2006 the computer science program at Gonzaga University was moved from the College of Arts and Sciences (CAS) to the School of Engineering and Applied Science (SEAS). Before the move, a significant proportion of students majoring in computer science (CS) also majored/minored in another discipline within the CAS. After the move, the proportion dramatically decreased in part because of: institutional hurdles for students double majoring across schools; a lack of CS courses within the CAS (where a greater number of students pursue double majors and minors); and additional CS, Math, and Science credits added to the B.S. degree to meet ABET Accreditation requirements. In 2009, we developed a Minor in Information Technology for CAS students that included courses in “computational thinking”, information technology, and computational courses in other CAS disciplines. In 2013, because of a perceived need for a CS degree with a stronger liberal arts background, we designed a new B.A. in Computer Science and Computational Thinking (BA CSCT). Inspired by our earlier CS degree requiring 18 credits in another discipline, the 2007 Model Curriculum for a liberal arts degree in CS, and a desire by administration to emphasize interdisciplinary coursework, the new interdisciplinary B.A. requires a concentration in a “Discipline for Computational Thinking (DCT)” in which the discipline is selected from CAS programs (including Art, Music, Sociology, etc.). The degree requires that an additional three elective CS courses be chosen to best integrate with the particular DCT chosen. What makes the BA CSCT degree unique is the integration of the computer science courses with the chosen DCT.