Explorations into Chinese as a Second Language 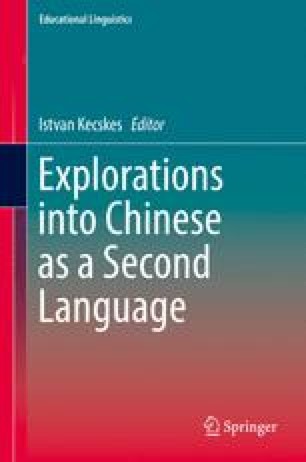 Toward a Corpus of Chinese Classroom Teacher Language

Despite having a negative impact on student progress, most Chinese language classes in Australian schools are conducted in English (e.g. Orton J, Tee J, Gong J, McCulloch J, Zhao YL, McRae, Profiles of Chinese language programs in Victorian schools. The University of Melbourne, Chinese Teacher Training Centre, 2012). This happens because teachers who are second language users (L2 teachers) themselves generally lack the language needed for running lessons, while first language user teachers (L1 teachers) find their unrestrained language is more than learners can cope with. To improve their students’ proficiency both sets of teachers need to learn to use frequently an accurate and natural, but reduced, corpus of classroom Chinese, which gets gradually developed. This paper presents the findings from research undertaken to start building that basic corpus.

The sources for a corpus of natural classroom language were recordings of the language used naturally in L1 teachers’ lessons in subjects across the curriculum in three Sinophone locations: Beijing day schools, a Hong Kong Mandarin-English bilingual school, and a Chinese Community School in Melbourne, Australia. A total of 18 lessons, ten primary and eight secondary, were recorded. Content included Mathematics, Discovery, Politics and (L1) Chinese. Analyses of these data isolated the language most commonly used in instructing, sequencing lesson stages, organizing activities, managing the learning process, and regulating classroom behavior. The results show that, regardless of the subject matter and the setting of the class, there was a shared set of teacher classroom talk that was finite and recurrent.

By reducing synonymous expressions to one high frequency term, and identifying key vocabulary and grammatical structures, a first corpus of natural, accurate, but pared down language was built. Tests of this corpus with L2 teachers revealed a very small volume of language new to them, and a learning challenge residing largely in mastery of spontaneous, fluent expression of connected complex clauses. The language was then divided into sequences to be used by teachers for managing activities in which students would only need to understand, and language that students would also need to be able to use actively and hence would need to be taught directly. On the basis of these analyses, professional development has begun for L1 and L2 teachers in running their lessons in natural but reduced Chinese only.