Toward an Other Globalization: From the Single Thought to Universal Conscience 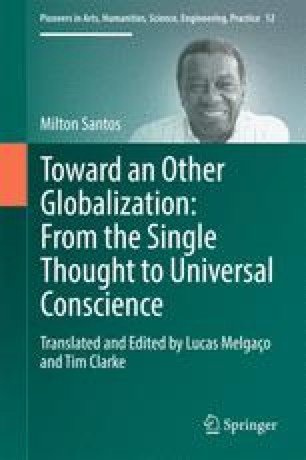 Toward an Other Globalization: From the Single Thought to Universal Conscience pp 79-99 | Cite as

Transition on the March

The gestation of the new, in history, frequently occurs in a manner that is almost imperceptible to its contemporaries, insofar as its seeds begin to impose themselves when the old is still quantitatively dominant. It is exactly for this reason that the ‘quality’ of the new can pass by unperceived. Yet history characterizes itself as an uninterrupted succession of epochs. This idea of movement and change is inherent to the evolution of humanity. It is in this way that the periods are born, mature, and die. In the case of the present world, we are conscious of living in a new period. However, the new that we more easily apprehend is related to the formidable resources of the technique and of science utilized by the new forms of big capital, which is supported by equally new institutional forms. It cannot be said that globalization is similar to previous waves of history, nor even a continuation of that which came before, precisely because the conditions of its realization are radically different. It is only now that humanity can rely on this new quality of the technique, provided by what will be termed the informational technique. We have just arrived at another century and humanity, by way of the advances of science, produces a system of techniques presided over by informational techniques. These techniques come to play the role of a link amongst others, uniting them and assuring the planet-wide presence of this new technical system.

Active Nation Popular Culture Mass Culture Underdeveloped Country Passive Nation
These keywords were added by machine and not by the authors. This process is experimental and the keywords may be updated as the learning algorithm improves.
This is a preview of subscription content, log in to check access.