Who Stole Our Market Economy? 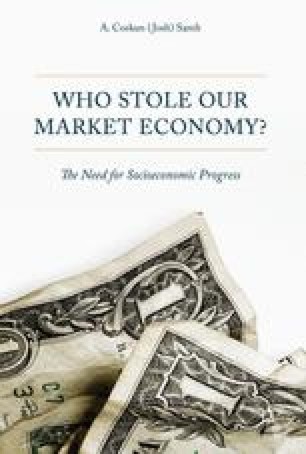 The Ripple Effects of Financialization

Chapter 14 tackles the big problem of what are the critical ripple effects of financialization.

Insurance Industry Ripple Effect Greed Factor American Medical System Shadow Banking
These keywords were added by machine and not by the authors. This process is experimental and the keywords may be updated as the learning algorithm improves.
This is a preview of subscription content, log in to check access.

It is shocking to find out that the American medical system is not only outrageously overpriced but is also discouragingly inadequate in its delivery. This certainly is related to the fact that our society lacks proper regulation and administration. It is estimated that 20 cents of every dollar spent for health care does not go to health care but to the marketing of it (Thomson 2015). This situation may be creating some jobs which are not essential to the economic well-being of the society but is creating billions of dollars for the greedy one percenters. The complexity of the medical profession is interfering with its delivery of cures. The system itself forces the doctors to be entrepreneurs trying to make money rather than being health caregivers. It would be quite natural, perhaps, if doctors were to be professors on a salary, that they would work harder to cure patients rather than to simply treat and manage symptoms.

If one snatches a purse illegally in our system of justice, one can get up to 10 years of jail time, but if 5,300 employees steal millions of dollars, the supervisor retires and receives a $125 million dollar “golden parachute.” Unfortunately, there is hardly any insurance protection for consumers in such dramatic and unexpected situations. One may question the fairness of the legal system or its lack thereof. It appears that, at the practical level, there are plenty of practical laws that are forcefully applied, but at higher and perhaps more critical levels there are no adequate laws. If there were adequate laws that were fully enforced, the financial sector and banking would not have created the great recession of 2007. There would have been severe penalties for certain illegal actions. Similarly, the supervisor at Wells Fargo could not have just resigned and been rewarded with millions of dollars of retirement benefits, and perhaps 5,300 workers would not have lost their jobs for following orders. Since the start of the deregulation era, there has been a tendency not to pass stringent laws and the major beneficiaries of this activity has been the one percenters. The result for society has been such that the financial sector has been getting away with somewhat questionable and risky activities without any supervision (Egan 2016). Illegal positions, as they stand, give financial institutions more freedom to do what is in their best interest as opposed to what is in the best interest of their shareholders, customers, and employees. This is obviously an indication of the governing body not being motivated to protect consumers and improving the quality of life, as opposed to making quick money for one percenters in some questionable ways. They are driven by the greed factor (Rogers 2016).

The Ripple Effect on Banking

In almost every recession, the “too big to fail” concept emerges. In the great recession of 2007, too big to fail banks created a housing bubble. The problem then was that there were no laws that would correct the behavior of these banks which proved to be deadly for our economy. However, one decade later, the fact is that these banks are still functioning the way they did then and are now bigger and stronger. Furthermore, they are somewhat interconnected to a certain extent and are supporting each other instead of competing. This interconnection appears to be increased in recent years and once again these too big to failers are engaged in exotic financial activities or financial gambling which is extremely risky (Martins 2015).

Perhaps the conditions discussed above led to a few regulations asking banks to be more transparent; however, these weak regulations are bypassed and ignored, perhaps with the exception of a few establishments with over 50 million dollars which are considered important (Goldstein 2016).

The Ripple Effect on the Pharmaceutical Industry

The pharmaceutical industry, because of financialization, has become broken and corrupt. Two particular examples elaborate on this very dangerous pattern. The first one is Mylan, which is producing the Epipen. The CEO of Mylan acquired the Epipen from the US Armed Forces, which is the original developer of this product. Its price went up from $57 to $608 which is a 400 percent increase. Subsequently, the company claimed that the increase in price was due to an increase in the quality of the product, which was hardly provable. The company did engage in many political manipulations to block competition from entering the market. This pattern of exploitation is currently continuing due to the lack of proper regulation. During the case of the Epipen episode, the company’s CEO’s salary went up from $2.5 million to $14 million (Winship 2016).

The second example indicating outrageous behavior of the pharmaceutical industry is a drug named Daraprim, which is used by AIDS patients. A shocking increase in its price from $13.50 for two tablets to $750 for two tablets, which represents an increase of 5,456 percent, caused tremendous hardship (Atwater 2016).

These are only two examples of what is happening in this industry. Without any regulations or controls, they could do anything they want.