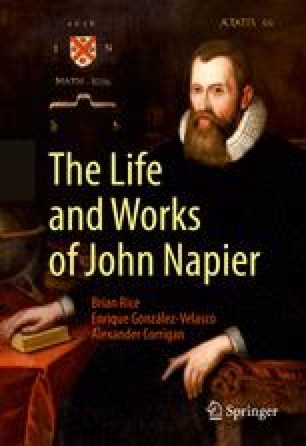 JOHN Napier’s A Plaine Discovery of the Whole Revelation of St John was first published in 1593/4, when Napier was 42 or 43 years of age and the edition reproduced in this volume appeared in 1611.1 Napier’s life, personality, worldview and mathematical achievements cannot be understood fully unless one understands something of this, his first published work. In the early modern period, Christianity provided people in Europe and the British Isles with a framework for understanding oneself, the rest of humanity, the universe, and everything in it. Christian faith was the most dominant force in the majority of people’s lives and governed every intellectual pursuit, including those that might now be classified as ‘the sciences’, driving people to make discoveries about the natural world to attain a closer relationship with its creator. The Plaine Discovery is an important text for anyone with an interest in Napier and his works because it explains the faith that governed his intellectual, public and private lives. His hopes and fears, and those of his audiences, were reflected in the book, and the first shoots of his interest in mathematics that blossomed two decades later in the logarithms may be seen.

Sixteenth Century British Isle Christian Faith Early Modern Period Biblical Text
These keywords were added by machine and not by the authors. This process is experimental and the keywords may be updated as the learning algorithm improves.
This is a preview of subscription content, log in to check access.