Globalization and Change in Higher Education 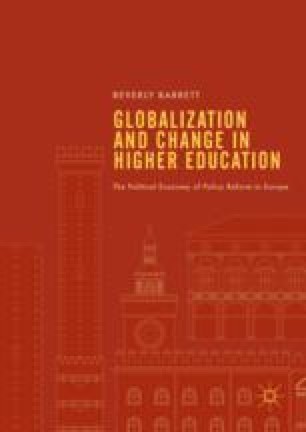 Globalization and Change in Higher Education pp 161-189 | Cite as

This qualitative case study on Spain compares the Iberian countries, which historically have had similar economic and political experiences in governance and in joining the European Union in 1986. After decades of authoritarian rule, Spain established a Constitutional Monarchy in 1978. The governmental structure of Spain is distinct from the unitary government of Portugal; it is a quasi-federal system that works collaboratively with the 17 autonomous communities that have had a substantive influence on the EHEA policy reforms. The structure of the higher education system is another distinction between the Iberian countries. Portugal has a binary system, where polytechnic and university institutions are administered under separate systems, and Spain has a unitary system of institutional governance. Spain’s participation in the EHEA is explained as a Europeanization policy process, wherein the supranational objectives for higher education policy influence the national objectives.

The public authorities guarantee the right of all to education, through general education programming, with the effective participation of all sectors concerned and the setting-up of educational centres.

Cite this chapter as:
Barrett B. (2017) Spain: Political Economy Explanations for Decentralized Reforms. In: Globalization and Change in Higher Education. Palgrave Macmillan, Cham