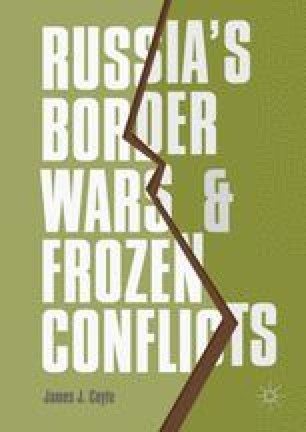 This chapter begins with the effect on Georgians of the collapse of the USSR. Some ethnic groups, specifically Ossetians and Abkhazians, used ethnic markers to demand creation of their own mini-states. This was opposed forcefully by the government of Georgia in Tiblisi, until Russia sent peacekeeping troops to the breakaway areas creating de facto separatist enclaves. An uneasy peace ensued until 2008, when the Georgian government tried to reunite the rebel provinces by force. Russian military intervention condemned this effort to failure and, in a larger geopolitical confrontation with the West, Russia subsequently recognized the provinces as independent countries.