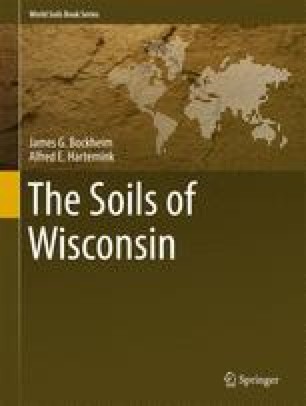 A paleosol may be defined as a soil that is no longer in equilibrium with the present environment (Ruhe 1965). Paleosols may be buried, relict (remain at the surface as ground-soils), or exhumed (previously buried material eroded from the surface) (Ruhe 1956). Numerous paleosols have been studied in Wisconsin. Early Holocene soils occur in northern Wisconsin on sediments deposited by an advance of ice into the Lake Superior basin 9.9 kyr BP (Clayton 1984).

Soil Series Superior Basin Driftless Area Superior basinLake Sandy Clay Layer
These keywords were added by machine and not by the authors. This process is experimental and the keywords may be updated as the learning algorithm improves.
This is a preview of subscription content, log in to check access.