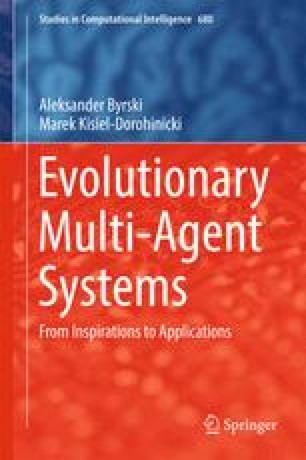 Considering the “no free lunch theorem” (Wolpert and Macready, IEEE Trans Evolut Comput 67(1), 1997, [297]), it is still important to try to test how the examined metaheuristic works when applied to different well-known problems. That is why several well-known benchmark functions are considered in the following experimental study (Digalakis and Margaritis, Int J Comput Math 79(4):403–416, 2002, [82]). In order to obtain plausible results, the systems compared should be parametrized in the most similar way. So it is the case presented in this section, as EMAS, and its memetic variants (Baldwinian and Lamarckian) are compared with PEA (along with respective memetic modifications). Later, a comparison between EMAS and its immunological variant (iEMAS) is made. Finally two discrete problems are tackled: Low Autocorrelation Binary Sequence (LABS) and Optimal Golomb Ruler (OGR).

Fitness Function Local Extremum Benchmark Function Fitness Function Evaluation Ising Spin Glass
These keywords were added by machine and not by the authors. This process is experimental and the keywords may be updated as the learning algorithm improves.
This is a preview of subscription content, log in to check access.