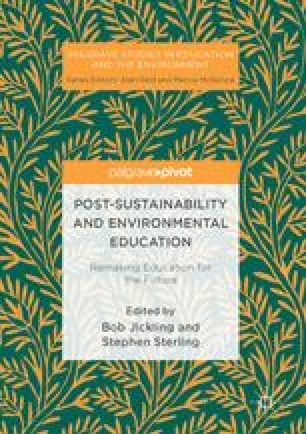 Saying Yes to Life: The Search for the Rebel Teacher

The chapter starts with suicide and ends in rebellious possibility. We begin by highlighting Albert Camus’s consideration of suicide, and in particular his assertion that in the act of choosing not to exercise our ever-present radical freedom to commit suicide there exists both a negation, saying no to suicide, and an exaltation, of saying yes to life. Camus’s purpose in this is to have us actively consider why we are choosing to stay alive and, as such, rebel against the possibility of suicide—and with purpose, choosing to say yes to life. We then focus on the distinction Camus draws between revolution and rebellion to allow us to more deeply explore his concept of the rebel and the shared role that negation and exaltation play therewith. By exploring Camus’s existentialist concept of freedom in order to name both a particular negation and exaltation for our times, as he was doing for his own time, we meet Camus’s challenge to consider, name, and act upon that which we choose to say yes to. The chapter concludes with an exploration of implications for environmental educators who want to adopt, and build upon the initial work presented in this chapter in pursuit of becoming creative, rebel teachers.