Central Asia and the Silk Road 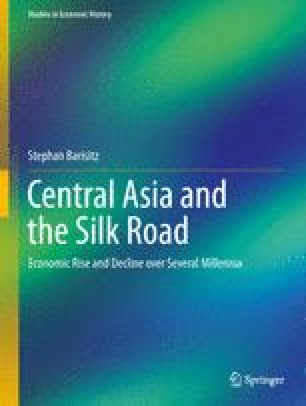 Some Lessons and Findings of this Study

This chapter summarizes some major points of the study and draws some conclusions. Thus, CA is seen as a unique global region of historic nomadic-sedentary interaction. Horseback nomads had the military edge over sedentary cultures and often dominated them in the course of almost two and a half millennia—up to the eighteenth century. The SR was a transcontinental trade network reaching from Europe via CA to India and China and existed for almost 2000 years. It featured three heydays: Han dynasty, Roman Empire (ca. 100 BCE–ca. 200 CE); Tang dynasty, Caliphate (ca. 675–875 CE); and Mongol Empire (ca. 1245–1345). Silk, horses, and other goods were traded in large quantities, but technological and cultural exchange was also intense. Transcontinental political stability may have been the most important factor favoring SR activity, while the spread of instability and warfare most often caused contractions of SR trade. Rising Western maritime competition on the routes to the Orient contributed to fatally eroding the overland network and indirectly weakening CA. The region enjoyed a degree of political or mercantile centrality in Eurasia up to the fifteenth century, followed by prolonged decline. In the nineteenth century, traditional CA and the SR were finally overrun by modernity (European colonialism). Throughout almost the entire premodern era, China stood out as the economically preeminent and most resourceful power along the SR.

Eighteenth Century Economic History Historic Literature European Colonization Economic Prosperity
These keywords were added by machine and not by the authors. This process is experimental and the keywords may be updated as the learning algorithm improves.
This is a preview of subscription content, log in to check access.