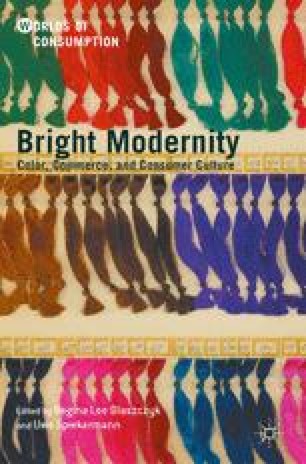 Natural dyestuffs were increasingly displaced by industrially produced artificial dyestuffs from the 1860s onward. First, the highly expensive new dyes succeeded in the high-end segment of fashionable silk dyeing. Second, scaling up production, bringing down manufacturing costs, and producing an ever-wider range of dyes enabled the dye industry to penetrate the mass market of ordinary cotton dyeing beginning in the early 1870s. By the 1890s, this market was finally won over by providing extensive services to dyers, binding them to the dyes of a single firm. Whereas British and French companies enjoyed success in the first stage, the larger and more marketing-orientated German companies were better equipped to succeed in the second stage and nearly monopolize the busines for good in the third stage.