The Ethics of Citizenship in the 21st Century 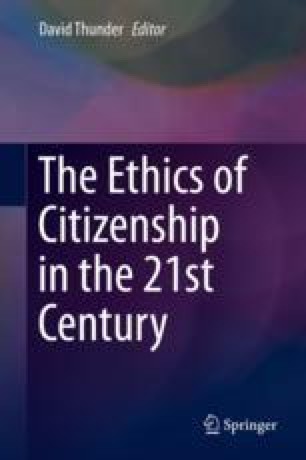 Civic Motivation and Globalization: What Is It Like to Be a Good Citizen Today?

Good citizenship is often associated with patriotism. The patriotic citizen identifies deeply with her country and has a primary and far-reaching loyalty to the country. In the twenty-first century, forms of identification that support patriotic citizenship are increasingly undermined. State boundaries play an ever smaller role in forging citizens’ identities, in defining citizens’ moral horizons, and as sites of the political problems with which citizens are most concerned. But there are still good reasons to want people to be good citizens, even if they cannot be patriotic citizens. What could take the place of patriotic citizenship? This paper sketches a model of the “wordly citizen.” The worldly citizen does not identify primarily with her country, but she nevertheless holds a strong derived commitment to her state, grounded in an accurate understanding of her place in her local community and the wider world. Worldly citizenship, the paper argues, is both recognizable and achievable. It stands as an attractive alternative to patriotic citizenship, and also to the “global citizenship” associated with strong forms of cosmopolitanism.