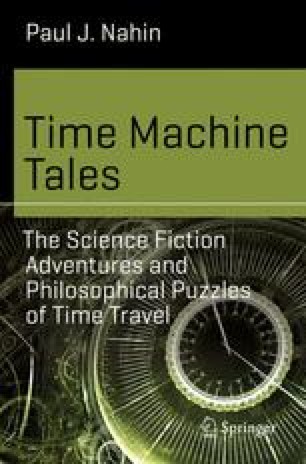 The Physics of Time Travel: Part I

Chapter
Part of the Science and Fiction book series (SCIFICT)

Before we start talking about the physics of time travel, let me say a few more words on time itself, in a way slightly less metaphysical that was the discussion in the previous chapter (which is why I’m writing this here, in a chapter with an increased emphasis on the analytical). When we speak of journeying to either the future or the past, we are implicitly making a distinction in the direction of the time traveler’s trip. But does time actually have a direction? Is there an arrow that points the way? The answer seems obvious: of course time has a direction. After all, everybody ‘knows’ it flows from past to future. There is a curious language problem here, however, because we also like to say the present recedes into the past, which implies a ‘flow’ in the opposite direction, from future to past. Well, despite this snarled syntax, can we at least distinguish past from future, whichever way time flows?

Time Travel Light Cone Time Machine Lorentz Transformation Science Fiction
These keywords were added by machine and not by the authors. This process is experimental and the keywords may be updated as the learning algorithm improves.

“… within forty-eight hours we had invented, designed, and assembled a chronomobile. I won’t weary you with the details, save to remark that it operated by transposing the seventh and eleventh dimensions in a hole in space, thus creating an inverse ether-vortex and standing the space-time continuum on its head.”

—almost certainly not the way to build a time machine