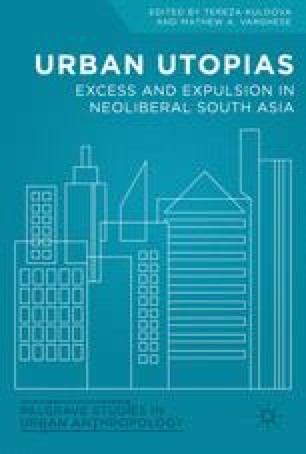 Excavating the City: Metro Rail Construction and Imagination of Past in Contemporary Jaipur

Metro Rail, an instrument for restructuring urban space in contemporary India into a mold of ‘world class’ city, is beginning its journey in Jaipur’s walled enclave/old city. At this very moment, the material process of this birth is being written onto the land and built environment of the city. In Jaipur, this initial moment of spatial reordering has become an exercise in reading the possible ‘pasts’ that are strewn across the city. Through detailing contestations between varied stakeholders such as government departments, groups agitating against the metro, and popular histories of the city over metro construction, the chapter seeks to describe the process of valuation of the city’s past, filtered through the trope of heritage-laden development and thriving tourism industry.

Urban Space Walled City Royal Family Metro Line Heritage Conservation
These keywords were added by machine and not by the authors. This process is experimental and the keywords may be updated as the learning algorithm improves.

This chapter is a part of my ongoing doctoral research on Jaipur. The process of metro construction in the walled city is still underway and several issues raised here are far from resolution. An earlier version of this chapter was presented at a seminar on ‘Life in the Indian City’ organized by Humanities Department, IIT Delhi, in April 2015 and more recently in the Yale Modern South Asia Workshop. I acknowledge the comments received during those discussions and from the editors, Tereza and Mathew, which have led me to revise this chapter.