Perspectives on Philosophy of Management and Business Ethics 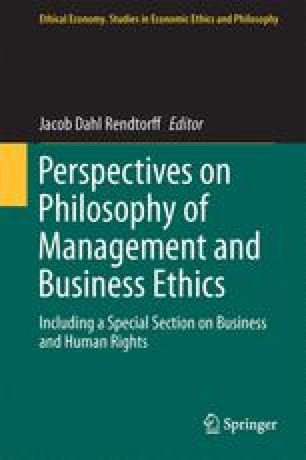 Who Cares Whose Cars? A Philosophical Analysis of Business and Human Rights

This chapter is about a concept that everyone takes for granted, both in socio-etic and legal contexts, but which, at closer scrutiny, is very problematic both in theory and in practice – the concept of human rights. In theory, this is problematic because of the relativists’ challenge; in practice – because of laws that are either non-existent, or unenforceable. The two sides of the argument, therefore, are – a philosophical analysis of the concept of human rights, and an investigation of their impractical nature, using a legal case – the Khulumani litigation. The third section of the paper is dedicated to finding a middle ground between the two, which can also provide a solution to the dilemma of having to choose between human rights’ universality and their practical feasibility – namely, the area of non-legal remedies and ‘sentimental’ (i.e. relativistic) rather than ‘rational’ (i.e. universal) grounds for human rights. As long as general opinion on whether we care about whose cars and computers an abusive regime uses, while engaging in human rights abuses, is that we do, it is important to try and find such grounds to bridge theory and practice. (This paper was prepared for and presented at the EBEN Research Conference on Philosophical Foundations of Business Ethics, in Copenhagen, October 2015, and it benefited a lot from the discussions we had there. I would like to thank the conference organisers, the members of my workshop team, and in particular Kristian Hoyer-Toft and Jane Ellis, for their valuable comments.)

Cite this chapter as:
Pascal AM. (2017) Who Cares Whose Cars? A Philosophical Analysis of Business and Human Rights. In: Rendtorff J. (eds) Perspectives on Philosophy of Management and Business Ethics. Ethical Economy (Studies in Economic Ethics and Philosophy), vol 51. Springer, Cham. https://doi.org/10.1007/978-3-319-46973-7_15