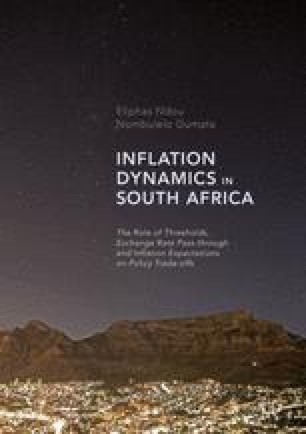 Do Credit Regimes Play a Role in the Pass-Through of the Exchange Rate Depreciation Shocks to Inflation?

The policy implication is that credit growth below the threshold of 9.5 per cent assists in containing demand-driven inflationary pressures and thus plays a role in neutralising the degree of the ERPT of the rand depreciation shocks to inflation. Within the context of the interaction of price and financial stability it seems to be the case that such a threshold can serve as one of the benchmarks to assess the build-up of potential threats to both policy objectives. In policy perspective, it can assist within the financial regulatory framework as one of the reference points to activate tools aimed at restricting credit-driven demand pressures and overheating, whilst assisting in lowering the degree of the ERPT to inflation in the process.

Government Credit Depreciation Shock Exchange Rate Pass-through (ERPT) Rand Depreciation Credit Growth
These keywords were added by machine and not by the authors. This process is experimental and the keywords may be updated as the learning algorithm improves.
This is a preview of subscription content, log in to check access.