The Ecosystem of Kongsfjorden, Svalbard 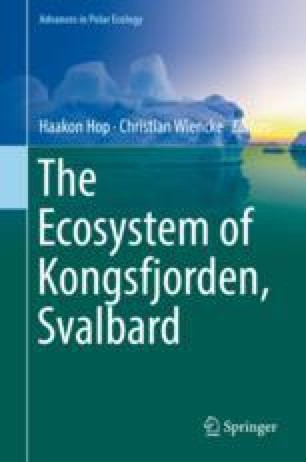 The Ecosystem of Kongsfjorden, Svalbard pp 49-104 | Cite as

The Kongsfjorden Transect: Seasonal and Inter-annual Variability in Hydrography

The Kongsfjorden conductivity, temperature and depth (CTD) Transect has been monitored annually since 1994. It covers the full length of the fjord and the shelf, and the upper part of the shelf slope outside Kongsfjorden. In addition to CTD profiles, data from vessel-mounted Acoustic Doppler Current Profiler (ADCP) and moorings have been collected. Previous studies noted that Atlantic Water (AW) from the West Spitsbergen Current was observed in the fjord every summer, but to a varying extent. The prolonged monitoring provided by the Kongsfjorden Transect data set examined here reveals continuous variations in AW content and vertical distribution in the fjord, both on seasonal and inter-annual timescales. Our focus in this paper is on this variable content of AW in Kongsfjorden, the forcing mechanisms that may govern the inflow of this water mass, and its distribution in the fjord. We classify three winter types linked to three characteristic scenarios for winter formation of water masses. During the historically typical winters of type “Winter Deep”, deep convection, often combined with sea ice formation, produces dense winter water that prevents AW from entering Kongsfjorden. Summer inflow of AW starts when density differences between fjord and shelf water allows for it, and occurs at some intermediate depth. During winters of type “Winter Intermediate”, AW advects into the fjord along the bottom via Kongsfjordrenna. Winter convection in Kongsfjorden will then be limited to intermediate depth, usually producing very cold intermediate water. Deep AW inflow continues during the following summer. A winter of type “Winter Open” seems to develop when open water convection produces very dense shelf water, and AW winter advection into Kongsfjorden occurs at the surface. Summer AW inflow is rather shallow after such winters. We find that variations between Winter Deep and Winter Intermediate winters are due to inherent natural variability. However, the Winter Open winters seem to be a consequence of the general trend of atmospheric and oceanic warming, and, more specifically, of the decreasing sea ice cover in the Arctic region. The Winter Open winters have all occurred after an unusual flooding of AW onto the West Spitsbergen shelf in February 2006.

The University Centre in Svalbard

Ragnheid Skogseth (RS) prepared and shared CTD data from the UNIS Hydrographic database (UNIS HD) with data collected by NPI, UNIS, IOPAN and SAMS or extracted from public databases like The Norwegian Marine Data Centre (NMDC at the imr.no), the PANGAEA database (AWI) and ICES. Funding for RS and the construction of the UNIS HD merits REOCIRC (Remote Sensing of Ocean Circulation and Environmental Mass Changes, a Research Council of Norway project no. 222696/F50). The Norwegian Polar Institute provided CTD data from July 2015 and July 2016 through the MOSJ program. The work contributes as well to the project FjoCon 225218/E40, financed by the Norwegian Research Council. We thank Colin Griffiths for overseeing the SAMS mooring programme supported by the UK Natural Environment Research Council (Oceans 2025 and Northern Sea Program) and the Research Council of Norway (projects Cleopatra: 178766, Cleopatra II: 216537, and Circa: 214271/F20). Contribution by FC and MEI was undertaken through the Scottish Alliance for Geoscience Environment and Society (SAGES).

Appendix A: The Kongsfjorden Transect Hydrography from Individual Years

The five Winter Deep winters with sufficient CTD data available to grid the transects are shown in Fig. 3.23, although in two of them, 1997 and 2009, the data coverage is poor in the central basin of Kongsfjorden. In 1997, the data coverage is also poor across the shelf-edge front. Focusing on those transects with good data coverage, all these years the WSC had a narrow warm core confined to the shelf-edge region, and reaching the surface. The surface shelf water had similar or lower density than the surface-layer part of the WSC core. The deepest part of the shelf water column was, however, generally denser than the water at the same depth in the WSC core, and the density differences across the front were weak at intermediate depth level.

Such a density distribution favors eddy overturning with AW exchange across the front dominating at the depth level where the density differences vanish, that is intermediate depth (Tverberg and Nøst 2009). This is indeed what can be observed over the shelf. The overturning cell indicated in the principle sketch (Fig. 3.17) of shelf-edge processes, would in such cases apply to the upper part of the water column only. In 2009, AW was found both at intermediate and deep water level, and cross-frontal density differences were weak at both levels. In the transects from the 3 years with good data coverage, it can be seen that Kongsfjorden interior was less influenced by AW than the shelf. We also note that in the mouth region of Kongsfjorden, a depression of the deepest isopycnals is visible each of these years. It may be possible that these depressions are associated with the coastal current at the mouth region of Kongsfjorden forcing the path of AW advection to be modified there (geostrophic control). The exact location of the depressions varies among the years, which may confirm that the location of the geostrophic control is located at the common mouth of Kongsfjorden-Krossfjorden (Kb0) in some years and at the mouth of the Kongsfjorden central basin (Kb1) in others. This is in line with the typical situation during a Winter Deep winter; denser water in the fjord in the deepest part of the water column enhances the bottom speed of the coastal current on the shelf, past the fjord.

Mooring data add valuable information from two of these years; 2006 and 2009. Most of the winter in 2006 was actually a Winter Intermediate winter with exceptionally strong deep AW advection, culminating in a rather short period with strong convection and mixing (see Fig. 3.5), and it must have been during this final part of the winter that the largest volumes of winter water were produced. The winter 2009 was opposite; during most of the winter the mooring data reveal deep convection and only weak indications of AW advection, except from a short period in late April with deep AW inflow (see Fig.  6.2 in Hegseth et al. this volume). That inflow was evidently not strong enough to replace all the winter water produced earlier that winter.