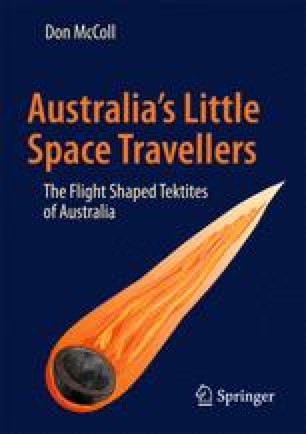 Tektites have been formed by gigantic asteroids which struck the earth many thousands of years ago, creating splashes of melted earth rocks which formed a glass and in a few cases were even flung right out into space. These frozen glassy bodies became the original tektites, which on their return to earth at hypersonic speed, behaved like tiny spacecraft. They were fiercely heated and melted on their leading faces, developing melting rings and flanges. These flight features are best shown on the tektites of Southern Australia, which are the best preserved in the world. Only a few scientists have seen the most incredible of these shapes, which is perhaps a matter of some regret. This book aims to pictorially show a wide range of these astounding specimens and offers suggested mechanisms to explain how they might have formed.

Source Rock Molten Glass Liquid Glass Local Rock Asteroidal Impact
These keywords were added by machine and not by the authors. This process is experimental and the keywords may be updated as the learning algorithm improves.
This is a preview of subscription content, log in to check access.