Foreign Trade as a Factor of Economic Growth 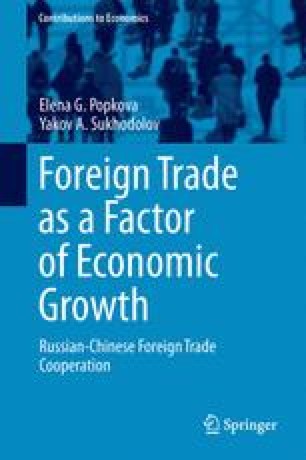 The authors conduct a SWOT analysis of the Russian economy in modern conditions and a general analysis of foreign trade turnover in Russia, determining the leading commodity group in the country’s exports and imports. This chapter also views Russian foreign trade with its main trading partners, observes the comparative characteristics of Russian commodity turnover with the Commonwealth of Independent States (CIS) and non-CIS countries for the leading commodity groups, performs an analysis of the situation in the external sphere, and examines Russian national interests and priorities, the level of development of foreign economic institutes, and the country’s position in the national economy in the context of the “Turn to the East” strategy. The authors prove the necessity for activation of cooperation with developing Asian countries—primarily with China.

Direct Foreign Investment Foreign Trade BRICS Country Foreign Trade Policy Foreign Economic Policy
These keywords were added by machine and not by the authors. This process is experimental and the keywords may be updated as the learning algorithm improves.
This is a preview of subscription content, log in to check access.

Cite this chapter as:
Popkova E.G., Sukhodolov Y.A. (2017) Role and Meaning of Foreign Trade Cooperation in the Globalizing World Through the Example of Russia and China. In: Foreign Trade as a Factor of Economic Growth. Contributions to Economics. Springer, Cham. https://doi.org/10.1007/978-3-319-45985-1_4