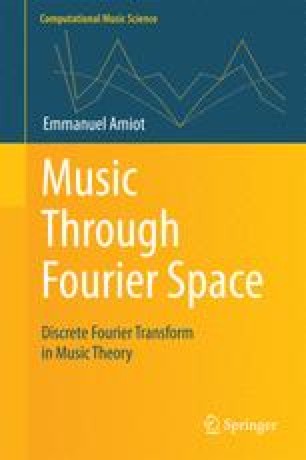 Originally, vanishing Fourier coefficients appeared as an obstruction: they impede phase retrieval and prevent, for instance, the solution of Lewin’s problem (find A knowing B and IFunc(A,B)). But recent research and problems shed a more positive light: for instance the set Z(A) of indexes k such that \( a_{k} = \hat{1_{A}} (k) \, = 0 \), a highly organised subset of \( {\mathbb{Z}}_{n} \), is now the fashionable introduction to a definition of tilings. The theory of tilings is a crossroad of geometry, algebra, combinatorics, topology; and one of those privileged domains where musical ideas enable us to make some headway in non-trivial mathematics. Here the notion of Vuza canon together with transformational techniques (often introduced by composers) allowed some progress on difficult conjectures. More generally, tiling situations provide rich compositional material as we will see later in this book, cf. Section 4.3.3. In that respect, I included in this chapter Section 3.3 on algorithms (for practical purposes, though there are some interesting theoretical implications in there too. We will need some additional algebraic material on polynomials, which is introduced in the preliminary section. A few more technical results of Galois theory are recalled and admitted without proof.

Cyclic Group Characteristic Polynomial Prime Power Regular Polygon Convolution Product
These keywords were added by machine and not by the authors. This process is experimental and the keywords may be updated as the learning algorithm improves.
This is a preview of subscription content, log in to check access.