Investment and Competitiveness in Africa 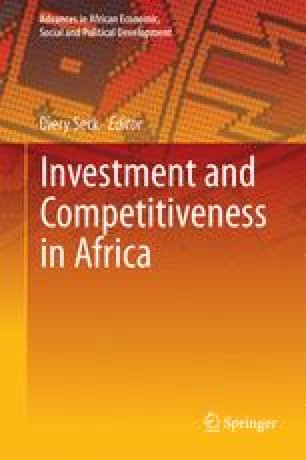 Investment and Competitiveness in Africa pp 51-68 | Cite as

Public Investment and Competitiveness in ECOWAS: An Empirical Investigation

The stationarity status of the variables y_growth, Yp, Pr, Gc Opn, Gf and Infla is observed using the Levin, Lin & Chu (LLC) panel unit root test. The LLC is based on the assumption that there is a common persistence of parameters across cross-sections.

The test equation used for the stationarity test for each of the variables is based on the graphical illustration as to whether each variable has an intercept or trend.

Among all the variables used for this study, only two are stationary in their level form. However, the variables tagged institutionalized democracy (Dem) is left out since it takes the form of a dummy representation in the analysis.

The growth variable (y_growth) is just stationary at level with probability value 0.000 which is less than the conventional 0.05 level. As expected, the inflation variable (infla) is also found with no unit root at its level (0.000). On this basis, both the growth and inflation variables are integrated of order 0.

Other variables such as Per capita GDP (Yp), private investment (Pr), government final consumption (Gc), Openness (Opn) and gross fixed capital formation (Gf) are stationary only after taking their first differences, hence they are integrated of order 1. The overall results of the stationarity test follow from the fact that most economic variables appear to be integrated in their first differences.

In the test for the long run relationship among the variables using the Johansen Fisher Panel cointegration test, a linear deterministic trend is assumed with lag interval of 11 in first differences.

For the growth equation where growth is endogenously defined and determined by the private investment, government final consumption, state of democracy, openness, government fixed capital formation; there is evidence of a long run relationship among these variables.

The long run relationship among the variables in the growth equation follows the interaction between the determinants and growth. It further demonstrates that these variables seem to be fundamental to growth in the ECOWAS region.

All the three variants also demonstrate a long run relationship between the government final consumption and its determinants.