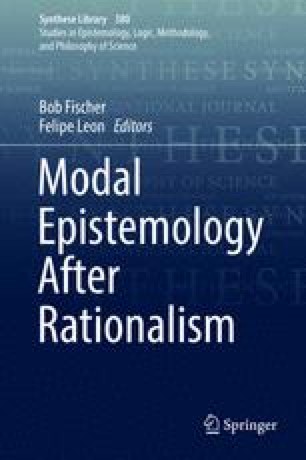 My topic is moderate modal skepticism in the spirit of Peter van Inwagen. Here understood, this is a conservative version of modal empiricism that severely limits the extent to which an ordinary agent can reasonably believe “exotic” possibility claims. I offer a novel argument in support of this brand of skepticism: modal skepticism grounds an attractive (and novel) reply to Humean skepticism. Thus, I propose that modal skepticism be accepted on the basis of its theoretical utility as a tool for dissolving philosophical paradox.

Rational Belief Epistemic Possibility Reasonable Belief Conceptual Possibility Green Emerald
These keywords were added by machine and not by the authors. This process is experimental and the keywords may be updated as the learning algorithm improves.
This is a preview of subscription content, log in to check access.

I briefly address the concern that the project of replying to Hume’s problem has run its course, drawing out, in particular, some considerations that point in the direction of a solution along the lines of that in the current paper. This concern arises by accepting one of the following: (i) there is little reason to think that we actually use enumerative induction in ordinary or scientific contexts; (ii) enumerative induction is a narrow and potentially misleading special case of a broader inference method such as statistical induction or abduction; or (iii) the problem of accounting for enumerative induction has effectively already been solved.

In reply to (i): I believe that enumerative induction plays such a basic role in everyday and scientific reasoning that it is easily overlooked. I reasonably expect that when I place my coffee mug on this table that the mug will not pass through the surface of the table and smash to the floor. This belief, it seems, is not the product of, say, acceptance of a certain theory of the physics of tables and mugs. My grounds are simpler: I have had ample experience in interacting with like objects and project these lessons to future interactions. Further, we can borrow from Norton a prototypical scientific belief that is naturally ascribed to enumerative induction: “we believe all electrons have a charge of − 1. 6 × 10−19 Coulombs, simply because all electrons measured so far carry this charge” (Norton 2005, pg.12).

In reply to (ii): I delay discussion of the possibility that enumerative induction can be folded into abduction and concentrate on the exceedingly plausible claim that enumerative induction is a special case of statistical induction (or perhaps just superseded by it). Statistical reasoning has reached a level of sophistication that suggests that undue attention to universal inference might be misleading or limiting. What justifies a focus on simple enumeration?

In response, I suggest the simpler setting of universal inference brings into focus an aspect of the problem of induction that is commonly overlooked – not least in technically sophisticated discussions focused on statistics.

To illustrate: suppose we embark on a study of the color features of the actual population of emeralds. Before gathering data, we agree (for whatever reason) to take seriously three possible candidate colors: green, yellow and mauve. As it happens, we then observe a random sample of emeralds with these color-types distributed in a 70-30-0 ratio. Statistical induction directs us to project this make-up onto the entire population of emeralds, and we draw our conclusions accordingly. Altogether, our investigative methods raise two obvious questions, though the first receives less attention: what, if anything, justifies our treating green, yellow and mauve as comprising the complete set of possible candidate colors? (In particular, in retrospect, was it sensible to include mauve as a possibility to be ruled out? If so, what justified limiting ourselves to only these three colors?) And, secondly, given a set of possible candidates, what justifies projection from a sample to the whole population? (In particular, did we select enough emeralds for our sample, and use a suitable selection technique? How confident should we be in our conclusion, given the size of our sample? Should we reserve some credence for the hypothesis that some mauve emeralds are lurking out there?)

A focus on enumerative induction simplifies the statistical issues and allows us to focus better on the first, neglected question. Indeed, as should become apparent, the response to Humean skepticism I propose in this paper depends on a view as to how best to answer the first question, not the second.

In reply to (iii): ingenuity aside, there is room to feel dissatisfied with the existing major proposals for dealing with Humean skepticism. I cannot back this claim comprehensively here, so offer only cursory worries for a few promising and influential recent proposals.29

Some propose that enumerative induction is a special case of abductive reasoning. According to the abductivist: the reason to believe that all emeralds are green – given an uninterrupted parade of observed green emeralds – is that this fact, if true, would best explain the observational data (Harman 1965). One reason to hesitate to embrace this proposal is skepticism that a happy outcome is likely for the debate concerning the nature of explanation and good explanation (van Fraassen 1989, pp. 142–148). However, even for those optimistic about securing the foundations of abduction (such as myself) there is room to doubt that abduction is the antidote to Humean skepticism. A good explanation, it is natural to presume, is one that, in some sense, generates understanding. But it is hard to see how the truth of “all emeralds are green” can by itself generate understanding as to why the emeralds I have observed are green. “All emeralds are green” entails that every emerald I observe is green, but fails to locate this fact in an “illuminating story” involving diverse (and possibly more primitive) facts, laws or entities. Or perhaps the abductivist’s claim is that we first use abduction to infer that the underlying causal-structural constitution of an emerald necessitates a green hue, then from this intermediate conclusion infer that all emeralds are green. But if an explanation citing necessitating constitutive facts is fleshed out as a detailed proposal, then it is no longer plausible that the proposed abduction captures the simplicity of enumerative induction; and if the details are left unspecified then we are again left with the question as to whether this “explanation” has genuine explanatory power. Further, the abductivist approach to enumerative induction highlights peculiar mysteries that might seem no better than (or are perhaps equivalent to) the problem of induction. For instance, if simplicity and explantory scope are offered as reasons to accept the hypothesis that all emeralds are green, then this merely provokes the question as to why these factors ought to be taken as a mark of truth.

Next consider the proposal that enumerative induction is simply a matter of subjective Bayesian inference. By subjective Bayesian lights, a rational agent is one whose degrees of belief (credences) take the form of a probability function, and who updates her beliefs by way of Bayesian conditionalization. The Bayesian may then cite a famous result due to De Finetti (1937): in the long run, so long as the agent’s prior credence function satisfies certain symmetry properties (namely, the property of exchangeability), a Bayesian agent’s credence function will eventually come to reflect the frequency information captured in the stream of her observational data. That is: if green emeralds occur with a 100 % frequency in the observations she collects, she will converge to a credence of 1 with respect to the hypothesis that all emeralds are green – essentially capturing the mechanism of enumerative induction. But this proposal again leaves room for reasonable doubt (Earman 1992). The subjective Bayesian does not typically offer reasons to think that a rational agent must have an exchangeable credence function. Nor does the typical subjective Bayesian offer much to guarantee an efficient rate of convergence to inductive conclusions. Yet, intuitively, enumerative induction is a highly efficient form of reasoning. To reasonably conclude that all electrons have a charge of − 1. 6 × 10−19 Coulombs does not, it seems, require excessive individual measurements.

Finally, consider the proposal of the formal learning theorist (Kelly 1996): there is no guarantee that the method of enumerative induction arrives at a true conclusion in the short term, but in a certain sense it is guaranteed to hit upon the truth in the long term, thereby rendering it a rational strategy for belief acceptance. For either there are only green emeralds, and so the conclusion “all emeralds are green” is true; or, if indeed there is a yellow emerald out there – and one is guaranteed to eventually observe this fact – then eventually one will come to modify one’s incorrect belief. The difficulty with this proposal is, however, two-fold. First, for ordinary agents, it is unlikely that their investigation will be so thorough as to guarantee that, if there is an exception to a universal claim, it will eventually be observed. Second, that it is in the long-run strategic to accept a certain claim does not by itself make it likely that claim is true (as the formal learning theorist admits). So it is left somewhat mysterious for the formal learning theorist why an agent should believe the conclusion of a universal inference, as opposed to merely accept it for strategic purposes.