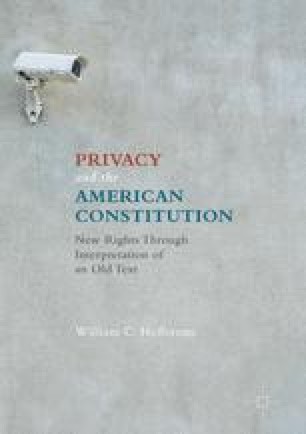 Chapter 9: Ambitious Supplementation: Griswold on Penumbral Emanations from the Bill of Rights

The modern system of privacy rights originated in Court decisions of the 1960s. Brandeis’s Olmstead dissent anticipated the possibility of a comprehensive system, but three and a half decades were to pass before the Court concluded that privacy should be protected independently of property rights. Two cases were essential to this new development: Griswold v. Connecticut, decided in 1965, and Katz v. United States, decided in 1967. Griswold and Katz are less than fully harmonious. But even though an effort is required to integrate the cases, it’s reasonable to speak of a coherent system of privacy rights, one that relies, albeit implicitly, on Brandeis’s 1928 dissent. This chapter examines the overall structure of the modern system of privacy rights. It emphasizes in particular the extent to which the Bill of Rights has been reshuffled to justify the rights announced. The public liberties established in amendments one to eight haven’t been discarded. Rather, new rights have been derived from the thin intimations of privacy discernible in the eighteenth-century text.

Personal Life Privacy Protection Modern System Privacy Signal Fourth Amendment
These keywords were added by machine and not by the authors. This process is experimental and the keywords may be updated as the learning algorithm improves.
This is a preview of subscription content, log in to check access.

Cite this chapter as:
Heffernan W.C. (2016) Chapter 9: Ambitious Supplementation: Griswold on Penumbral Emanations from the Bill of Rights. In: Privacy and the American Constitution. Palgrave Macmillan, Cham