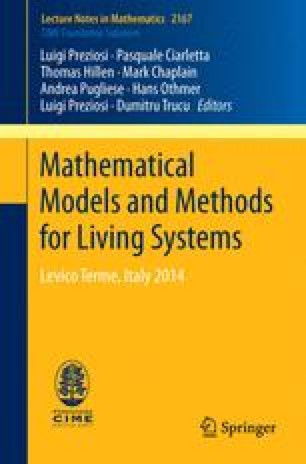 Movement of amoeboid cells is involved in embryonic development, wound repair, the immune response to bacterial invasion, and tumor formation and metastasis. Individual cells detect extracellular chemical and mechanical signals via membrane receptors, and this initiates signal transduction cascades that produce intracellular signals. These signals control the motile machinery of the cell and thereby determine the spatial localization of contact sites with the substrate and the sites of force-generation needed to produce directed motion. The coordination and control of this complex process of direction sensing, amplification of spatial differences in the signal, assembly of the motile machinery, and control of the attachment to the substratum involves numerous molecules whose spatial distribution serves to distinguish the front from the rear of the cell, and whose temporal expression is tightly controlled. How chemical and mechanical signals are integrated, how spatial differences in signals are produced, and how propulsive and adhesive forces are controlled are issues that are amenable to mathematical modeling. An overview of some approaches to these complex problems is the subject of this chapter.

Actin Filament Fruiting Body Actin Network Stochastic Simulation Algorithm Perfusion Experiment
These keywords were added by machine and not by the authors. This process is experimental and the keywords may be updated as the learning algorithm improves.
This is a preview of subscription content, log in to check access.

One of the earliest formal statements of what is now know as a singular perturbation reduction is given by Tikhonov’s theorem [99].

The geometry behind the theorem is qualitatively as shown in the following sketch.

Actin is one of the most abundant proteins found in eukaryotic cells and is highly conserved throughout evolution. Actin monomers polymerize in an ATP-dependent process to form polarized actin filaments. The helical actin filament has a barbed end and a pointed end. In non-muscle cells, the dynamic organization of filamentous actin gives rise to various cell structures, such as filopodia, lamellipodia, and stress fibers.

AKT/PKB Cellular homologue of AKT retroviral oncogene protein Ser/Thr kinase. Also called Protein Kinase B because of homology with Protein Kinase A and Protein Kinase C family members. AKT has an amino-terminal pleckstrin homology (PH) domain that binds to the lipid products of phosphoinositide 3-kinase, phosphatidylinositol-3,4-bisphosphate and phosphatidylinositol-3,4,5-trisphosphate. This binding locates it at the plasma membrane where it becomes phosphorylated on Thr-308 (human AKT1) in the activation loop of the catalytic domain by phosphoinositide-dependent kinase 1 (PDK1). This phosphorylation leads to activation. Full activation requires phosphorylation at a second site (Ser-473 of human AKT). Mammals have at least three distinct genes for AKT family members (AKT1, AKT2 and AKT3) and they appear to at least partially redundant in function.

Alpha-actinin is an actin cross-linking protein that belongs to the spectrin superfamily. It forms antiparallel homodimers in a rod-like structure with one actin-binding domain on each side of the rod. It can, therefore, cross-link two filaments of actin.

Arp2/3 (Actin-related protein complex) Extracellular and intracellular signals that initiate actin cytoskeletal rearrangements flow through the Arp2/3 complex. The Arp2/3 complex is composed of seven subunits, two unconventional actin proteins, Arp2 and Arp3, and five additional proteins. One copy of each subunit is present in the complex. In addition to contributing to the nucleation of actin filaments, the Arp2/3 complex caps the slow-growing pointed ends of actin filaments and promotes the elongation of the actin filament at the fast-growing barbed end. Arp2/3 complexes are localized at the branch point of two different filaments, binding to both the side of the mother filament and the pointed end of the daughter filament. These interactions create an approximate 70∘ angle with the actin barbed end oriented towards the plasma membrane. These observations serve as the basis for the “dendritic nucleation” model in which Arp2/3, through its interaction with F-actin, is a key regulator of the unique meshwork of F-actin in the lamellipodial structure. The Arp2/3 complex influences the strictly regulated reorganization of the actin cytoskeleton in response to various signaling pathways.

B-Raf is a serine/threonine protein kinase that is a member of the Raf family of protein kinases. Raf-B can be activated by the small GTPase Ras as well as Rap1. cAMP activates MAP-Kinase through B-Raf.

Cdc42 is a Rho-family GTPase that was first identified as a regulator of cell polarity and budding in yeast. In mammalian cells, Cdc42 is activated in response to integrins and bradykinin. Activated Cdc42 induces formation of actin-rich structures known as filopodia. Cdc42 affects actin directly by binding to its effector WASP, an activator of Arp2/3 and actin polymerization. During cell migration, Cdc42 is also responsible for polarization of the cell.

Chemotaxis the directed movement of a microorganism or cell in response to a chemical stimulus.

G-proteins G-proteins are heterotrimeric proteins comprising alpha, beta and gamma subunits. When bound to guanine nucleotide diphosphate (GDP), G-proteins are inactive, and are activated when bound to guanine nucleotide triphosphate (GTP). When activated, they split into alpha-GTP and beta-gamma subunits that are separately used for control of downstream processes. The alpha subunit has intrinsic hydrolysis activity that removes a phosphate group, whereupon the alpha-GDP subunit recombines with a beta-gamma subunit.

G-protein coupled receptors (GPCRs) G-protein-coupled receptors are integral membrane proteins with seven membrane-spanning helices. G-protein is bound to the receptor in its inactive state, and when a ligand is bound, the receptor may undergo a conformational change that facilitates the GDP-GTP exchange on a G protein, which then detaches from the receptor. GPCRs can desensitize when exposed to ligand for a sufficient length of time as a result of phosphorylation of a cytoplasmic receptor domain by protein kinases.

In vitro the recreation of biological processes in an artificial laboratory environment.

In vivo biological processes that take place within a living organism or cell.

Kinase an enzyme that catalyzes addition of a phosphoryl group to proteins.

MLCK (Myosin Light Chain kinase) is a serine/threonine kinase that phosphorylates the regulatory light chain (RLC) of the molecular motor myosin, resulting in increased contraction. In nonmuscle cells MLCK is involved in the regulation of cell motility.

MLCP (Myosin Light Chain phosphatase) dephosphorylates the regulatory light chain of molecular motor myosin, thus inactivating it. MLCP is involved in the regulation of the actin cytoskeleton and cell spreading.

PAK (p21-activated kinase) is a serine/threonine kinase that binds to and is activated by Rho family GTPases. The PAK family of kinases is highly conserved among species. PAK family members have an N-terminal kinase domain and a C-terminal p21 Rac and Cdc-42-binding domain. The binding of Rho family GTPases to the C-terminus of PAK causes a conformational change resulting in autophosphorylation and activation of the kinase. PAK family members have been shown to play a role in actin polymerization and cytoskeletal dynamics.

PI3K Phosphoinositide 3-kinase catalyzes the phosphoryation of phosphatidylinositol-4,5-bisphosphate to produce phosphatidylinositol-3,4, 5-trisphosphate. The enzyme is cytosolic and become localized to the plasma membrane, which activates the catalytic subunit. Binding of the catalytic subunit to activated Ras appears to enhance the membrane association and activation.

Phosphatase an enzyme that removes the phosphoryl group from proteins.

Protease (proteinase, proteolytic enzyme) an enzyme that degrades proteins, such as collagen, laminin, and fibrin.

Rac is a small GTP-binding protein which belongs to the Ras superfamily. Rac activity depends on the ratio of GTP/GDP bound forms. GEFs (guanine nucleotide exchange factors), GAPs (GTPase activating proteins) and GDIs (guanine nucleotide dissociation inhibitors) thus determine its activity by regulating of the GTP/GDP bound form. The downstream effectors of Rac are involved in regulation of the cytoskeleton.

Ras is a small protein that is activated by exchange proteins of the SOS (Son of Sevenless) or Ras-GRF (Ras GDP Releasing Factor) family. The release of GDP and binding of GTP ‘activates’ Ras, allowing it to bind to downstream effectors, including phosphoinositide 3-kinase (PI3K). Ras is anchored at the plasma membrane via a carboxy-terminal farnesyl group. One function of Ras is to facilitate localization of its cytosolic effectors at the plasma membrane. Mutant forms of Ras that stabilize the GTP bound state contribute to tumor formation.

Rho GTPase is a member of Rho family of small GTP binding proteins, which include Rho A, B, G. It is active in the GTP-bound state and inactive when bound to GDP. Activation of Rho results in its association with a wide variety of effector molecules and leads to activation of downstream signaling cascades. Rho proteins exhibit intrinsic GTPase activity Rho that is significantly stimulated by GTPase activating proteins (GAPs). Conversely, GTP exchange factors (GEFs) promote exchange of GDP for GTP, thus activating Rho. Rho GTPase regulates actin cytoskeleton organization and assembly, in particular actin stress fibers and focal adhesion formation. It is involved in cellular processes that depend on actin cytoskeleton such as cell spreading and migration.

RLC (Regulatory Light Chain of myosin) binds to the neck region of Heavy Chain (HC) of myosin and regulates its motor activity. When RLC is phosphorylated by myosin light chain kinase on Ser19 it causes conformational changes in myosin and activates its motor function. Dephosphorylation of RLC by myosin light chain phosphatase negatively regulates myosin activity. Phosphorylation of RLC in smooth muscle cells leads to initiation of contraction, whereas in striated muscles it increases speed and force of contractions. There is also evidence that in nonmuscle cells myosins are participating in cell motility, spreading, cytokinesis and vesicle transport.

ROCK Rho kinase/ROKalpha/ROCK-II and a related protein p160ROCK/ROCK-I are serine/threonine kinases. Integrin-dependent activation of Rho family small GTPases induces Rho-Rho kinase interaction and facilitates translocation of Rho kinase to the cell membrane. Rho kinase facilitates formation of focal adhesions and actin stress fiber assembly. It cooperates with other Rho effectors to regulate the formation of actin structures. Rho kinase associates with and phosphrylates myosin phosphatase. Phosphorylation leads to the inhibition of phosphatase activity and thereby enhances myosin-mediated contractility. Rho kinase has been shown to facilitate tumor cell invasion due to its role in cytoskeletal reorganization. In addition, Rho kinase promotes cytokinesis by phosphorylation of myosin light chain at the cleavage furrow.

Small G proteins A class of monomeric, low molecular weight (20–25 kDa) GTP-binding proteins that regulate a variety of intracellular processes. The GTP bound form of the protein is active and is inactivated by an intrinsic GTPase activity, which is controlled by GTPase activators (GAPs), GDP dissociation inhibitors (GDIs), and guanine nucleotide exchange factors (GEFs).

SOS (Son of Sevenless) is an exchange factor that stimulates GDP release from Ras to allow GTP binding and formation of the active state. SOS has a pleckstrin homology (PH) domain that mediates binding to the membrane.

WASP (The Wiskott-Aldrich Syndrome protein) mediates a variety of signals from kinases, receptors, and small G proteins to the Arp2/3 complex and the actin cytoskeleton. Homologs in the WASP family include SCAR and WAVE. The family members share two similar domains: one that mediates interactions of WASP with adaptor proteins such as profilin, and another involved in interaction with Arp2/3 complex and G-actin. GTP-Cdc42 binding to WASP stimulates the Arp2/3 complex resulting in actin polymerization.