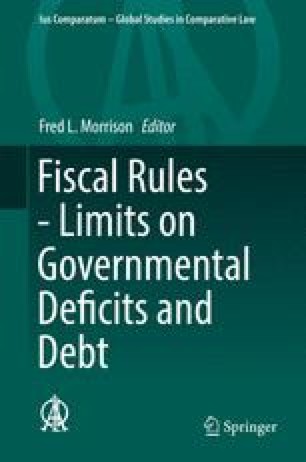 Legal limitations on government deficit and debt exist at all levels of the legal hierarchy, international, regional, constitutional, and statutory. The International Monetary Fund imposes conditionality upon the loans that it supplies The European Union and its monetary group, the Eurozone, impose quite specific numerical caps on governmental deficits and debts, with significant sanctions for states that violate the standards. A few national constitutions include so-called “debt-brakes” that limit deficits and borrowing. Every state has laws that regulate the preparation and presentation of the budget and its review; some of these also seek to control deficits or borrowing. Ordinary laws are, however, susceptible to change by simple amendment or suspension if economic or political objectives seem to require disregard of a previously established standard.

Recent experience has shown an increasing use of supranational limits on national deficit and debt, with implementation by the IMF or the EU institutions. It also shows an increase in the use of objective measures (e.g., debt or deficit limits expressed in percentage of GNP) rather than the subjective standard previously used.

International Monetary Fund Monetary Union National Constitution Judicial Review Government Debt
These keywords were added by machine and not by the authors. This process is experimental and the keywords may be updated as the learning algorithm improves.

[Who keeps the keepers?]