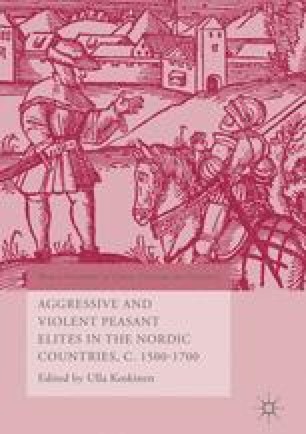 This chapter deals with civil unrest, uprisings, and revolts in Sweden—a country that has a long history of riots and uprisings. The fifteenth century was especially violent, as in many other European kingdoms, with rebellions and civil war being the order of the day, and this continued into the next century, particularly during the reign of Gustav I (1523–1560), when the kingdom was rocked by upheavals until the last great uprising in 1595 against the ruling nobility in Ostrobothnia (Österbotten), Finland. The aim during the sixteenth century was never to overthrow the king but to achieve local independence. After this, there were only small outbreaks of unrest and violence during the seventeenth century. So where did this political unrest go, and how should the smaller outbreaks of political violence that ensued be interpreted?

Seventeenth Century Sixteenth Century Fifteenth Century Political Strategy Civil Unrest
These keywords were added by machine and not by the authors. This process is experimental and the keywords may be updated as the learning algorithm improves.
This is a preview of subscription content, log in to check access.