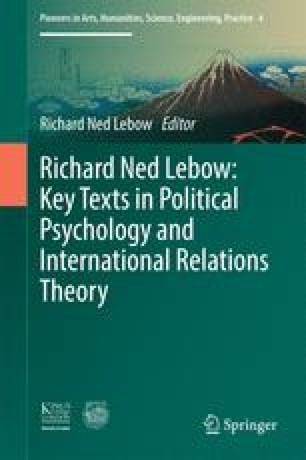 From Plato to Rawls, philosophers have emphasized the need for reason to constrain or channel emotions if political orders are to be created and preserved. From the ancient Greeks to the present a minority of thinkers have been alert to the personal and social benefits of emotions. In the last decade, research in neuroscience has begun to explore the relationship between cognition and affect and numerous studies indicate that they interact in complex, often positive ways that are still poorly understood.

I follow Aristotle, Smith and Tocqueville in believing that affect and reason are essential to good performance of complex cognitive tasks. Together, they determine the kind of sensory inputs we seek or respond to and how we evaluate this information and act upon it. I am particularly interested in explaining cooperation at every level of social aggregation. Toward this end I develop a typology of conflict and cooperation that attributes these different outcomes to the nature of the affect involved and how it interacts with reason.

I develop my argument in four sequential stages. I open with a short overview of thinking about the reason and emotions. Until quite recently emotions have either been ignored or considered detrimental Political scientists and psychologists long assumed that emotional arousal reduces the ability of people to carry out complex cognitive tasks or make good decisions. I then review recent work in neuroscience on emotions and their role in decision-making. The MRI is a remarkable tool that can identify “hot spots” in the brain associated with different activities, emotions and cognitive processes. This gives neuroscientists the ability to image neural networks associated with emotions. These are, of course, correlative, not causal associations. In neuroscience, emotions are increasingly conceived as superordinate psychological mechanisms that coordinate, regulate and prioritize other physiological processes. They are assumed to play a motivational not a passive role. Neuroscientists are finding that emotions are involved in decision-making, generally in a positive way, and from the earliest stage of deciding what information deserves our attention. This research offers strong evidence for philosophers like Aristotle, Smith and Tocqueville who argue for the beneficial role that emotions can play in personal development and social relations.

Negative Affect Positive Affect International Relation Nicomachean Ethic Instrumental Reason
These keywords were added by machine and not by the authors. This process is experimental and the keywords may be updated as the learning algorithm improves.
This is a preview of subscription content, log in to check access.