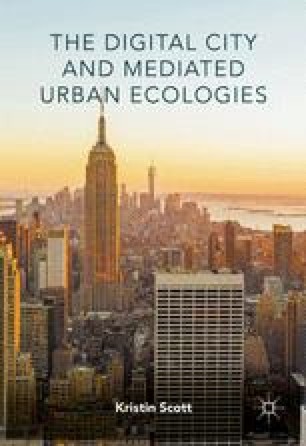 This chapter introduces NYC’s recent digital technological goals and objectives to become the world’s premier “digital city” and a global model for open government, as first outlined within their Road Map for the Digital City. I then provide some discussion of the relevant distinct, historical, political, and economic contexts out of which NYC’s digital technological initiatives arise. I explore a number of major features of the city’s digital programing: the city’s project to provide free Internet access and the acquisition of the .nyc TLD; NYC’s use of social media, smartphone applications, and alert notification services; the city’s recent passing of the Open Data Bill and its public open data platform; and NYC’s use of aggregated data to inform urban policy decisions. Despite NYC’s claims that their use of digital technologies enhance and support open government and provide greater opportunities for democratic engagement, for instance, many of their digital technological programs give greater, mediating, communicative power to government and corporate partners than residents, which in turn threaten open democracy and an accessible public Internet commons. The city’s use of social media, smartphone applications, and alert systems, furthermore, is all articulated as democratizing and protective forces; however, these claims become complicated by not only the city’s role in the administration and regulation of people’s everyday lives, the existence of regimes of knowledge and intelligibility about residents’ daily practices, and the training of the social body through mechanisms of biopower but also the use of residents as user–producer laborers, the collection of data (knowledge) through crowdsourcing, and neoliberal interests. NYC’s use of the metaphor of a “healthy civic society,” I argue, becomes an ideological narrative that obscures the city’s use of many of its digital technologies as tools of governmentality, as they function to construct, maintain, and control productive social bodies, while becoming also examples of contemporary neoliberal techniques of power—or neoliberal governmentality, in which the government crowdsources responsibility for the city’s overall civic health to its population.

Open Data Civic Engagement Smart City Digital Economy Digital City
These keywords were added by machine and not by the authors. This process is experimental and the keywords may be updated as the learning algorithm improves.
This is a preview of subscription content, log in to check access.