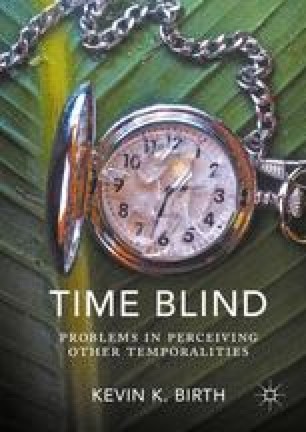 Prelude The Duplicity of Time

Henri Hubert, one of the founding figures in the anthropology of time, wrote, “The division of time entails the maximum of convention and the minimum of experience” (1999, 70). Barbara Adam, a leading current figure in the social scientific study of time, writes, “Time forms such an integral part of our lives that is rarely thought about” (1995, 5). The lack of thought about time can lead to unexamined assumptions, and these assumptions can mislead us when we study the ideas of time from other cultures and eras. Along these lines, A.J. Gurevich observed, “The present perception of time bears very little resemblance to that of other epochs” (1976, 230); Robert Levine notes, “Life on clock time is clearly out of line with virtually all of recorded history” (1997, 81–82); and Sacha Stern argues that assumptions about temporal regularity common today are unfounded in the study of ancient calendars and consequently lead to misunderstandings (2012). These observations suggest a problem for the study of cultural differences, namely, that a dimension of thought and experience about which we are unreflective might be shaped in ways that are culturally unusual. As I wrote in Objects of Time, “In thinking about the human understanding of time through the human past and across cultural differences, we have adopted a unique and artifactually mediated set of ideas as the ideal type against which all other ideas are understood and evaluated” (2012, 169). Could attempts at studying cultural differences be refracted through the unusual, even eccentric, assumptions about time derived from relatively recent developments in the European time-keeping tradition?

Clock Time Atomic Clock Social Scientific Study Spatial Metaphor Clock Performance
These keywords were added by machine and not by the authors. This process is experimental and the keywords may be updated as the learning algorithm improves.
This is a preview of subscription content, log in to check access.