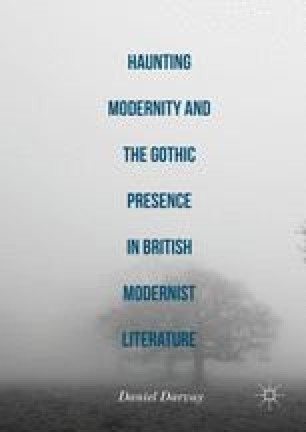 The arguments in this book tried to give an indication of the plasticity of the Gothic genre, as it emerged from the social and cultural history of the English Reformation, and as it continued to adapt to changing conceptions of everyday life in the hands of modernist writers. As I hope it has become clear by now, the Gothic revival at the end of the eighteenth century was more than the mere reification in fiction of popular fantasies thriving in the shadows of mainstream conceptions of history, society, and culture. What might look like a mere extraneous appendage, and therefore variously figured in the overall framework of this genre as hostile, reactionary, fantastic, marginal, or nostalgic, represents in fact the hidden motivation through which reality can present itself with the distinctive clarity and transparency of modern conceptions of thought. Generation after generation of writers, including the modernist authors discussed in this book, who not only did not see themselves working within the Gothic tradition, but often adopted an outright hostile attitude toward it, proved to be incapable of escaping the all-pervading artifice of Gothic ideas. The complex picture of the Gothic must be put together from widely different elements and contexts, which, besides the generic features of a literary genre, include religious and esoteric beliefs, aesthetic theories, and philosophical discourse, in addition to cultural histories of science and medicine, plus social and political arguments with a sustained presence over the long history of modernity.